Last Friday, Vice President Mike Pence and his wife, Karen, returned to Indianapolis to vote.  In the process of doing so they declared as their residence as 4750 N. Meridian Street, i.e. the Governor's mansion.  Of course, Pence is no longer Governor and a man named Eric Holcomb, who is the Governor, and his family live at the mansion.
I went to law school with Mike Pence.  I was editor of the law school paper and Mike was the cartoonist.  I liked Law School Mike Pence very much.  We shared the same conservative politics and I enjoyed discussing the issues of the day with him.  But what Mike Pence and his wife did last Friday is illegal.  I would be a lot more sympathetic with Pence not knowing the law if this issue had not been litigated just eight years ago.
In 2012, I heard then Senator Richard Lugar was using as his voting residence a place he no longer lived. That was consistent with what a very high-ranking Republican official told me about Lugar having to stay in hotel rooms when he came back to Indiana because he did not have a home in the state..  A trip to the Marion County Voter Registration Office and the Assessor's Office confirmed that Lugar was claiming as his residence a northwest Indianapolis house he had sold some 30 years later.  A private investigator went to that residence to talk to the owner.  She had no idea that Lugar was claiming her residence was his every time he requested an absentee ballot. 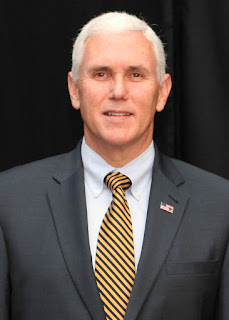 In 2012, Lugar's residency for voting purposes was challenged before the Marion County Election Board.  Lugar lost before the Board because under Indiana law he had abandoned the house he was claiming as his residence.  (More on the abandonment issue in a second.)  Rather than appeal the decision, Lugar relented and re-registered using his family's farm in Decatur Township, on the southwest side of Indianapolis.
At this point, let me clarify there are two residency issues that came up during the Lugar kerfuffle.  There is residency to serve as U.S. Senator.  That is set by the Indiana Constitution which only requires that the person be an "inhabitant" of the state.   Because that is a constitutional requirement, a state law cannot change or modify that qualification.  It would have to be a constitutional amendment.
Residency for voting purposes, however, is entirely a creature of state law.  Three statutes come into play:
Indiana Code (IC) 3-5-2-42.5 says:

“Residence” means the place:
(1) where a person has the person's true, fixed, and permanent home and principal establishment;  and
(2) to which the person has, whenever absent, the intention of returning.

As provided in Article 2, Section 4 of the Constitution of the State of Indiana (which deals with elections), a person does not lose residence in a precinct in Indiana by reason of the person's absence on the business of: (1) the state of Indiana; or (2) the United States

The question is how to read those three statutes together.  The answer is fairly obvious.   A person serving in office does not lose his or her residency for voting because that person is out of the state on that service.  But he or she can lose residency for another reason - the abandonment of one's residence.  That is exactly what the Marion County Election Board decided happened in the Lugar case.
But what about those official Indiana Attorney General Opinions which the Pence people claim allow him to vote using the Governor's Mansion as his residence?  Well, they are not official opinions of the Attorney General and they do not say that at all.
As this matter was being litigated in 2012, Senator Lugar asked for an opinion on his residency for voting purposes from his fellow Republican, then Indiana Attorney General Greg Zoeller.   Zoeller's office though did not write an "official opinion" on the law.  (Here is an example.) Instead, Zoeller's office issued a document titled "Advisory Letter 12-04" which was signed not by Zoeller, as an official opinion would be, but by his then Chief Counsel, Matthew J. Light.
At the time, Lugar used this "advisory letter" to claim he was allowed to vote using the address of the home he had sold.  The problem for Lugar though is that Light's letter did not say that.  Light very cleverly said that Lugar did not lose his residency for voting purpose because of his official service as U.S. Senator, which is what IC 3-5-5-5 explicitly says.   But that was never the issue.  The issue was Lugar's use as his residence for voting purpose a home he had sold decades earlier and to which had no intent to return to, i.e. an abandonment of the residency as set forth in IC 3-5-5-4.  Although the Light letter does briefly mention the residency abandonment statute, it then proceeds to ignore that statute, instead focusing on whether Lugar lost his residency because of his service as U.S. Senator.  Again,not the issue.
The Light letter mentions a 1982 Indiana Attorney General "advisory letter" (also not an official opinion) Lugar had received.  That letter also focused on the issue of whether his service in Washington, DC causes him to lose his Indiana residency to vote.  Once again, not the issue.
Neither the 2016 or 1982 advisory letter dealt with the fact Lugar had abandoned his residence by selling his home with no intent to return to it after his service as U.S. Senator had concluded.  Yet he continued to vote for decades using that abandoned home as his residence.
If Vice-President Pence loses re-election, is he on January 20, 2021 going to return to living in Governor's Mansion?  Of course not.  He abandoned that residence to go live elsewhere.  He has no intention of returning to that address when he stopped being Indiana Governor.  Under IC 3-5-5-4, Pence cannot continue using that address as his residence for voting purpose..
I should add that, even if Indiana law allowed then Senator Lugar and Vice President Pence to vote using an abandoned residence because they are out-of-state on official business, per IC 3-5-5-5, there is absolutely nothing in that statute or the Indiana Attorney General "advisory letters" which provide a legal justification for their spouses, Char Lugar and Karen Pence, continuing to vote using that address. They are not out of the state on on official business.  They are private citizens.
By the way, voting using an address where you do not legally reside, is considered voter fraud, a level 6 felony.  See IC 3-14-2-16.
Posted by Paul K. Ogden at 2:09 PM

I can just hear Gary Welsh laughing at Pence from his grave! We are curious is Holcomb going to let the Pence’s camp out at the Governors mansion, and get there mail there? Seriously old Mickey is a complete pain in the ass!

Didn't Charlie White get convicted of voter fraud for doing precisely what Mike and Karen Pence just did?

I actually started to mention that in my column, but thought it might take things too far away from the original topic.

What CW was convicted of was actually much less of an offense than the Lugars and Pences committed. It certainly is arguable that CW was residing at the address he claimed to be living at when he voted. With regard to Lugar and Pence, there is absolutely no question that the address they claimed to be their residence is not in fact their residence. And they have made that false representation time and time again. CW was just alleged to have done it once. Bayh at least owned the property which he claimed as his residence...though he could remember the exact address when asked.

In short, they were out to get CW and he did not have the political clout to stop the lynch mob.

Charlie White is my former step-brother-in-law. He was living with his then girlfriend in Carme, but voted using his ex-wife's (my step-sister) address in Fishers because he was still on the Fishers town council and thus required to reside in Fishers. He was convicted, removed from office and sentenced to 1 year house arrest. Pence committed felony voter fraud plain and simple!

I read many pieces about flagrant, criminal violations of laws by members of this Administration. Why are there no prosecutions, arrests, fines or convictions?

For voting purposes, a person does not lose their residence in a precinct if they are away serving "on the business of the United States," according to Indiana law and the Indiana constitution.

Business like serving as the vice president of the United States.

In Lugar's case he had sold his house some 30 years earlier and continued to vote year after year claiming his "residence" was his former home where someone else was living. Obviously that was not a place he intended to return to once his service was over. (FYI, Senator Lugar, in fact, would stay at hotels when he came back to see his Indiana constituents and supporters.) Like Lugar, VP Pence has no home in Indiana to arguably return to (not aware of him owning or renting property in Indiana that he would live at...and regardless he certainly didn't claim that home as his residence) and instead claimed his "residence" was the Governor's mansion to vote this year. Unless he planned to move into the Governor's Mansion on 1/21/21, then what Pence did by voting using that as his "residence" was illegal.

The law is not hard for Indiana politicians working in D.C. to follow. Just get a cheap apartment and stay there a few nights when you return to Indiana. Of course, the simple fact is the residency for voting law has never been enforced except for those individuals named "Charlie White."