A friend sent me a link to a video by Claremont Institute Chairman Thomas Klingenstein in which he denigrates the Black Lives Matter movement and praises Donald Trump as a great President, someone perfectly suited to the times.   Needless to say, I found a lot wrong with the address.

This is how the Claremont Institute describes its mission:

To return to limited government, conservatives must return to the principles of the American Founding. The Claremont Institute provides the missing argument in the battle to win public sentiment by teaching and promoting the philosophical reasoning that is the foundation of limited government and the statesmanship required to bring that reasoning into practice.

I cannot overlook the irony that Claremont's mission is making the argument for limited government while the think tank's chairman, Klingenstein, enthusiastically supports a President who clearly does not believe in limited government.  President Trump has consistently pushed for expanded executive power and has dismissed efforts of Congress to provide oversight to the actions of the Executive Branch.  Likewise, Trump has expressed open disdain for the constitutional limits imposed by federalism, repeatedly encroaching into areas, such as law enforcement, the Founders delegated to state and local government officials.  Other constitutional provisions meant to restrain executive power, such as the emolument clauses, are just ignored by President Trump. 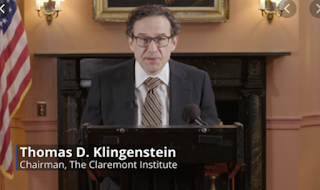 When it comes to foreign policy, Trump has offered praise for dictators wielding unlimited powers, people like Russia's Vladimar Putin, North Korea's Kim Jong Un and Turkey's Recep Erdogan.  Trump even praised the Chinese government for its massacre of pro-democracy protesters in Tienanmen Square in 1989.  Trump has consistently expressed admiration for dictators who can govern without limits.  He wants to have their power.  It is inconceivable that a think tank which claims as its mission the support of limited government, would enthusiastically back a wannabe autocrat like Donald Trump.

In his address, Klingenstein hammers Black Lives Matter, declaring the dangers of multi-multiculturalism.  Here is but a snippet:

For the multiculturalist to change traditional values and principles they must destroy, or radically restructure, the institutions that teach those values and principles. The most important of these institutions is family, but also very important is religion, education (which they have mostly destroyed already) and community life, replacing the latter with government bureaucrats. It is here—in these value-teaching institutions—that we see the underpinnings of the Revolution. This is where the real action is. Republicans seem to be missing in action.

Republicans need to explain that BLM and their Democratic enablers wish to destroy the traditional mother-father family. To substantiate this claim, Republicans have only to point to the BLM mission statement. The mission statement, written by avowed Marxists, also lets us know that BLM holds transgenderism to be the burning issue of our time.

Republicans must also explain that religion, because it teaches American values, is also on the chopping block.

(Note:  For a good explanation of the difference between the BLM organization and BLM movement, see this explanation from Republican Newtown council member Ryan Knapp.)

If the BLM portion of Klingenstein's address was not disingenuous enough, he goes completely off the rails when he starts talking about his support of Donald Trump:

He has the indispensable attribute of a leader: courage. As a leader must, he goes where others are afraid to go. And he has common sense, which means he generally wants to go to the right place.

Above all else, and above anyone else, Trump is committed to America. He is unreservedly, unquestionably pro-America. He feels no guilt for America’s past. He makes no apologies. He concedes nothing. These may not always be the attributes one wants in a President, but in this day of woke guilt they are the most essential things. And Trump has unlimited confidence in America. In this time of national doubt, this too is just what the doctor ordered. He thinks our culture is “incredible” and that’s the way he wants to keep it.

Trump not only thinks America is incredible, he knows we are in a fight for our lives.

And despite what one hears ad nauseum from the Democrats, Trump is perhaps among the least racist presidents we have ever had. Trump is not defending the white way of life; he is defending the American way of life, a colorblind way of life which is open to anyone who is willing to embrace it.

Klingenstein thinks Donald Trump has "courage."  Trump dodged the Vietnam draft by having a doctor fake diagnose him with bone spurs.  He recently walked out of an interview with 60 Minutes because he was scared of answering tough questions.  He belittles people who criticize him, are smarter him (which is virtually everybody), or are more successful than he is. Trump is one of the least courageous people I know.

Klingenstein thinks Donald Trump has "common sense."  There is nothing from Trump's 70 plus years of life that suggests he is blessed with even an ounce of common sense.  To be fair though, even Trump's most fervent supporters do not try to claim he has common sense.

Klingenstein offers that Trump is "pro-American."  When confronted with intelligence that Russia's Putin had put bounties on the heads of American soldiers, Trump did NOTHING.  He has on several occasions mocked Gold Star families (most recently accusing them of giving him Covid-19), belittled war hero John McCain for having been captured, and called Americans who gave their lives in World War I, "suckers" and "losers."  Trump has no respect for American democratic values such as freedom of speech, freedom of press, separation of powers, checks and balances, federalism, and the rule of law.  He worships dictators while undermining our democratic allies at every turn.  I cannot think of a President who is less "pro-American" than Donald Trump.

As far as Trump being "among the least racist presidents we have ever had," that defies common sense. At the start of his career in the real estate industry, Trump entered into a consent decree to stop discriminating against blacks in renting apartments.  He not only didn't want African-Americans in his rentals, he said he did not want them working on his casino floors, handling the money.  Said it would make the patrons uncomfortable.  Trump started his political career by denigrating Mexicans as violent criminals, he then tried to enact a ban on Muslims coming into the country, and later called African countries "shit hole countries."   When asked whether he would denounce the former KKK leader David Duke, Trump lied and said he didn't know who he is.  Whenever asked to denounce white supremacists and white nationalists, Trump always initially demurs and only agrees to do so days later when the backlash becomes too great.

Through his address, Klingenstein seeks to bestow on the failed Trump presidency an intellectual veneer of success and a reason to re-elect him.  But instead what Klingenstein does is expose his own  intellectual dishonesty.