With President Trump still suffering from Covid-19, I've been asked what would happen if Trump's health situation make it impossible for him to continue as a candidate.

The rules of the Republican National Committee allow for its members, totaling 168, to replace such a candidate on the ballot without reassembling the convention of delegates who did the original nomination. 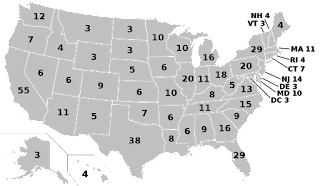 It is important to remember though when you vote for President, you're not technically voting for an individual candidate.  You're voting for a slate of electors the candidate's party has selected.  Thus, in Indiana, the Republican and Democratic Parties have each filed with the Secretary of State the names of 11 electors who will get to cast ballots in the event their candidate wins the state's popular vote.

But what if that candidate has passed away or dropped out, perhaps due to health reasons?  That's where things get dicey.

While a party could replace a candidate, it is not clear that the party has the power to tie the electors' hands.  In states where the electoral vote is tied to the popular vote, that is done via a state law.  Here you would have the party issuing the directive for electors to vote for a replacement candidate.  Additionally, what do those electors do in states where they are legally required to vote for the winner of the popular vote in that state?  If Trump wins the state, but he's no longer a candidate, would they still be obligated to vote for Trump?  We do have the precedent of Congress refusing to count electoral votes cast for Democratic presidential candidate Horace Greely who died after the 1872 election.  Because Republican Ulysses Grant won that election, it did not become a constitutional crisis.

When this sort of thing happened again in 1912, the Republican Party succeeded in persuading electors to vote for a replacement for the vice presidential candidate who died.  Once again, it was not a constitutional crisis because Democrat Woodrow Wilson won that election.

If the death of a presidential candidate were not enough to reveal the murkiness of the Electoral College, consider another scenario.  Let's say that once the votes are all counted, Trump trails in the Electoral College tally 304-234.  A resounding Biden victory!  But, wait, the Trump is claiming election fraud in Florida (29 electoral votes) and Arizona (11 electoral votes).  He asking that the legislatures of those two states to intercede and award him those states' electoral votes.  Could the Republican legislatures in those states override the popular vote?  According to dicta in the Bush v. Gore, legislatures have every right to do just that:

The individual citizen has no federal constitutional right to vote for electors for the President of the United States unless and until the state legislature chooses a statewide election as the means to implement its power to appoint members of the Electoral College. U.S. Const., Art. II, §1. This is the source for the statement in McPherson v. Blacker, 146 U.S. 1, 35 (1892), that the State legislature’s power to select the manner for appointing electors is plenary; it may, if it so chooses, select the electors itself, which indeed was the manner used by State legislatures in several States for many years after the Framing of our Constitution. Id., at 28—33. History has now favored the voter, and in each of the several States the citizens themselves vote for Presidential electors. When the state legislature vests the right to vote for President in its people, the right to vote as the legislature has prescribed is fundamental; and one source of its fundamental nature lies in the equal weight accorded to each vote and the equal dignity owed to each voter. The State, of course, after granting the franchise in the special context of Article II, can take back the power to appoint electors. See id., at 35 (“[T]here is no doubt of the right of the legislature to resume the power at any time, for it can neither be taken away nor abdicated”) (quoting S. Rep. No. 395, 43d Cong., 1st Sess.).

I chose Florida and Arizona because Republicans control bother chambers in those states' legislative bodies and those states also have Republican governors. But the language of the U.S. Constitution does not seem to provide a role for state Governors in deciding how electors are to be awarded.  If that is true that would mean the electoral votes in swing states that have Republican legislatures, but Democratic governors, might have their electoral votes reassigned as well. These states include:  Michigan (16), North Carolina (15), Pennsylvania (20) and Wisconsin (10).

Needless to say, the whole thing is likely to end up in court.

A quick note on the Bush v. Gore case:  Following the 2000 election, Democratic presidential candidate Al Gore had wanted to recount only select Florida counties where he believed he could pick up votes.  The United States Supreme Court, on a 7-2 vote, agreed with Bush that the different standards of counting the votes employed by local officials in the Florida counties violated the Equal Protection Clause.  The vote was only 5-4 on the question as to whether there was still time to recount the entire state employing a single standard.  I bring this up because Bush v. Gore is so often said to have been  decided on a 5-4 vote, when in fact the major legal issue in the case was decided 7-2.