I looked for and finally found the transcript of the conference phone call Nebraska Senator Ben Sasse had with constituents in which he went on for more than 9 minutes criticizing President Trump.   There should not be any doubt that Senator Sasse expected, and wanted, his comments to be "leaked" to the media.  I also think there is little doubt Sasse had this answer scripted out in advance.   Sasse is betting Trump loses in a landslide and the future of the GOP will rest with those who spoke out against Trump and Trumpism before the election.

FYI, I have emboldened some of the more pertinent sections.

Thanks Senator. I think, like a lot of Nebraskans, I’m trying to understand your relationship with the president. Why do you have to criticize him so much?

Sure. So that is a very fair question. And I guess, I kind of think about it like this. I think we should distinguish between policy agreement and policy disagreement, and then also, long term political implications as well. So I’ve worked hard to develop a good working relationship with the president over the last three and a half years. I obviously campaigned for a lot of other people in the 2016 cycle. But Donald Trump is our president now, so I’ve worked hard to develop a good relationship with him, he’s got a hard job, and we’re called to pray for our leaders, so that’s what we do regularly at the breakfast table at our house, is we pray for the president, and the First Lady, and for Vice President Pence in their callings. 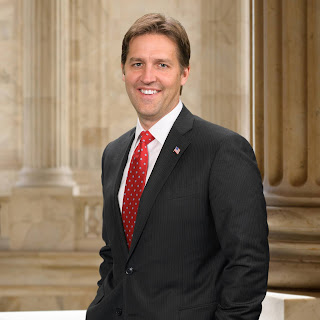 Senator Ben Sasse: (00:55)And there are obviously a number of issue areas where president trump and I have policy alignment now. Or maybe a better way to put it is, where the president has now adopted traditionally Republican positions that he used to reject for the majority of his life when he was funding Democratic candidates. So, for example, one of the places where he’s changed, as we were just mentioned to the last questioner, is I think he’s nominated truly great judges, and I worked with him on that. In fact, I went on the judiciary committee after he was elected, explicitly to advocate for the kind of originalist and constitutionalist that he had put on his list, and that he had agreed to nominate. I’m the first Nebraskan on the judiciary committee in I think 46 years. I’m 48 years old and I’m the first Nebraskan on the committee since the mid 70s.

Senator Ben Sasse: (01:39)So there are definitely places where we agree. But, as your question says, there are obviously a lot of places where he and I differ as well. And these aren’t just mere policy issues. And I’m not at all apologetic for having fought for my values against his in places where I think his are deficient, not just for a Republican, but for an American. So the way he kisses dictators butts. I mean, the way he ignores that the Uighurs are in literal concentration camps in Xinjiang right now. He hasn’t lifted a finger on behalf of the Hong Kongers.

Senator Ben Sasse: (02:14)I mean, he and I have a very different foreign policy. It isn’t just that he fails to lead our allies, is that the United States now regularly sells out our allies under his leadership. The way he treats women, and spends like a drunken sailor, the ways I criticized President Obama for that kind of spending, I criticize President Trump for it as well. He mocks evangelicals behind closed doors. His family has treated the presidency like a business opportunity. He’s flirted with white supremacists. I mean, the places where we differed on COVID. He, at the beginning of the COVID crisis, he refused to treat it seriously for months, he treated it like a news cycle by news cycle PR crisis rather than a multi-year public health challenge, which is what it is.

Senator Ben Sasse: (02:56)And that, I mean, in his partial defense here, I think that lots of the news media has pretended that COVID is literally the first public health crisis ever, and somehow it’s Donald Trump’s fault. That’s not true. They just wanted to use it against him. But the reality is, that he careened from curb to curb. First he ignored COVID, and then he went into full economic shutdown mode. He was the one who said, 10 to 14 days of shutdown would fix this. And that was always wrong. I mean, and so I don’t think the way he’s lead through COVID has been reasonable, or responsible, or right.

Senator Ben Sasse: (03:30)So these are some of the important policy or sort of leadership places where we differed, stuff we don’t see eye to eye on. And I think that it’s my duty to level with Nebraskans. Even though I recognize that a lot of our voters in Nebraska are Trumpier than I am, and they sometimes get frustrated with me. But I also think voters have told me, the most common thing I hear from Nebraskans, is they have a very mixed perspective on the president. They think he does some stuff well and they think he does some stuff poorly. And the truth of the matter is, I think he’s done some stuff well and some poorly. And so I’ve been honest about that.

Senator Ben Sasse: (04:05)But those are kind of policy and leadership issues. I think it’s also worth, for those of us who care about the party of Lincoln and Reagan, we should distinguish between policy and politics. Because my dissents from President Trump are not only about policy, but it’s also a prudential question, or a political question, about whether or not he’s ultimately driving the country further to the left. Because that’s what I think is ultimately going to happen because of Donald Trump. This has been my fear for five years. It’s why I campaigned for everybody not named Trump in 2016. And that is because I think folks have regularly misunderstood the meaning of 2016.

Senator Ben Sasse: (04:43)Donald Trump didn’t win the presidency because America actually wants more reality TV round the clock stupid political obsessions. I just don’t think that that’s what my neighbors want, it’s not what I hear when I travel the state. I’ve spent lots of the last year on a campaign bus. And when you listen to Nebraskans, they don’t really want more rage tweeting as a new form of entertainment. I think the overwhelming reason that President Trump won in 2016 was simply because Hillary Clinton was literally the most unpopular candidate in the history of polling.

Senator Ben Sasse: (05:17)We’ve had polls going back about 85 years. And Hillary Clinton is by far the worst presidential candidate America has ever had. General election presidential candidate. And I think that’s why President Trump won. Not because he laid out a constructive vision of the country that Americans united around. And so I think it’s always been imprudent for my party, again, as I mentioned. Calling it the party of Lincoln and Reagan. Those are the heights of American history. It has always been imprudent for our party to try to tie itself to a Trumpian brand. And that’s what I’ve been worried about for five years.

Senator Ben Sasse: (05:52)And so for months, as I’ve been campaigning over the end of 2019 and all of 2020 again, I’ve been straight with Nebraskans. That I’m worried that if President Trump loses, as looks likely, that he’s going to take the Senate down with him. And if conservatives lose the Senate, here’s what progressives are going to try to do. They’re going to fracture the deliberative structure of the Senate, that’s what blowing up the filibuster means. And that’s the whole ballgame. They’re going to add states, they’re going to pack the Supreme Court, and that puts religious liberty and the broader first amendment at risk. And that’s the heart of who we are as Americans, is people who understand that government doesn’t give us our rights, God gives us our rights via nature, and government is just our shared project to secure those things.

Senator Ben Sasse: (06:38)And Donald Trump doesn’t steward that. He doesn’t do storytelling to the next generation. And now, Senate Democrats, if they get to a super majority that they can end the filibuster, I’m worried that some of the most terrible nuttiness that we see happening on campus will get imported into our jurist prudence. And that would be a terrible remaking of America. And so, from where I sit, as one of the most conservative guys in the US Senate, I’m now looking at the possibility of a Republican bloodbath in the Senate. And that’s why I’ve never been on the Trump Train. It’s why I didn’t agree to serve on his reelection committee, and it’s why I’m not campaigning for him, because I spend all my time thinking about the one political question that’s most central next month, which is holding the US Senate.

Senator Ben Sasse: (07:23)If we don’t… I’ll pull up and get back to questions here Tyler. But I just think if we don’t retain the Senate, there’s a very good chance that 10 years from now we’re going to have a Venezuela-like, dozens of members of the Supreme Court. You can imagine, 30, 40 people on the Supreme Court at some point. And when all of our allies from the Pacific have sided with China because Trump’s isolationism was so weak, that our allies begin to doubt, for the first time since WWII, whether they can trust in US strength, and US will, and US courage, and US virtue and values. If young people become permanent Democrats because they’ve just been repulsed by the obsessive nature of our politics, or if women who were willing to still vote with the Republican party on 2016 decide that they need to turn away from this party permanently in the future, the debate is not going to be, “Ben Sasse, why were you so mean to Donald Trump?” It’s going to be, “What the heck were any of us thinking that selling a TV-obsessed, narcicisstic individual to the American people was a good idea?”

Senator Ben Sasse: (08:29)It is not a good idea. I think we are staring down the barrel of a blue tsunami, and we’ve got to hold the Senate, and so that’s what I’m focused on. I’m not focused on Donald Trump, I think the media has done a terrible job of making us all believe that the presidency is always the most important thing for people to talk about. First of all, politics shouldn’t be the center of our conversation, or our life, or our culture, or our economics. But even inside politics, the presidency shouldn’t be the center of that.

Senator Ben Sasse: (08:57)And I think that Donald Trump and the media are united in wanting to make him the center of every conversation. And I think overwhelmingly, the most important political issue we face right now is whether or not Republicans can retain it, and so that’s why I’m spending my time and energy on… Thanks for your question. Tyler, who’s next?