Four weeks from Election Day Deadline, the polls for Trump and Republicans could hardly be any worse.  An NBC News/Wall Street Journal poll, conducted after last week's debate, shows Biden leading nationally by 14 points.  Mid-September the NBC News/WSJ had the Biden lead at 8 points.

Then today came the release of a new CNN poll, conducted after the debate and after Trump's Covid-19 diagnosis. which shows Biden leading the race by 16.  This represents a doubling of the lead from CNN's last poll at the start of September.  By the way, the most recent CNN poll has Biden with a 66-32 lead among women.

The all-important swing state polls don't offer Trump and Republicans any solace.  A Monmouth University poll shows Biden's lead among registered voters in Pennsylvania reaching at 12%.  Polls released yesterday and today show Biden leading in Florida, New Mexico, Arizona, Wisconsin, Michigan and Delaware.  Trump did have an Ohio poll go in his favor though (by 4 points), as well as, not surprisingly, polls in North Dakota, Utah, and Alabama. 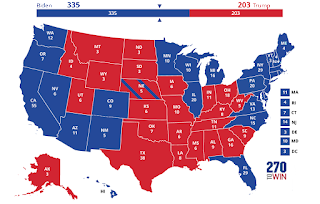 Let's take a look at the current swing and near-swing state poll averages, according to FiveThirtyEight:

The website 270towin.com has a model which combines nine different electoral forecasts to come up with a consensus, no toss-up electoral map.  The consensus map. which gives Ohio, Iowa. Texas and Georgia to Trump, has Biden winning the electoral college 335-203.