Ivanka Trump and Jared Kushner are threatening to sue the Lincoln Project over billboards the anti-Trump group put up in Times Square assailing them over the White House's coronavirus response.

In a letter to the group posted on Twitter on Friday night, an attorney for the president's 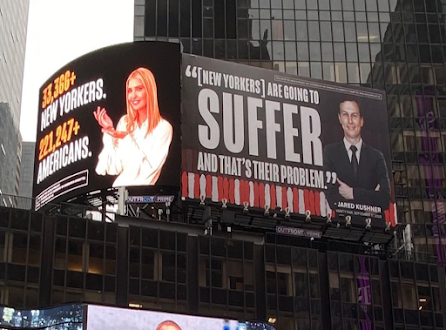 daughter and son-in-law demanded the “false, malicious and defamatory” billboards be taken down.

Marc Kasowitz warned that if the ads stay up, “we will sue you for what will doubtless be enormous compensatory and punitive damages.”

The Lincoln Project was defiant, saying in a scathing public statement that the billboards would stay up.

The billboards feature an edited photo of Ivanka Trump smiling and gesturing at coronavirus death tolls in New York and the U.S. — the original photo depicted her holding up a can of Goya beans — and a quote attributed anonymously to Kushner in a September Vanity Fair article.

“The Lincoln Project’s representations” of Trump and Kushner “are outrageous and shameful libel,” Kasowitz wrote to the group.

The group responded: “The level of indignant outrage Jared Kushner and Ivanka Trump have shown towards The Lincoln Project for exposing their indifference for the more than 223,000 people who have lost their lives due to their reckless mismanagement of COVID-19 is comical. While we truly enjoy living rent free in their heads, their empty threats will not be taken any more seriously than we take Ivanka and Jared.” 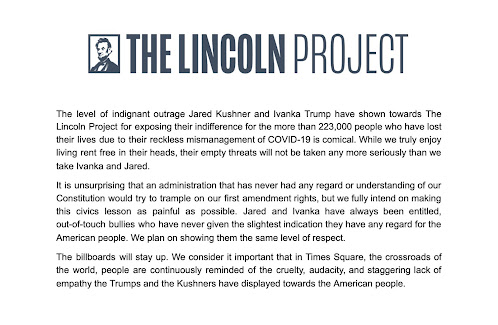 Maybe the best part of Trump losing election would be that his idiot family members would be gone from the White House.