Who would have thought that in a debate between President Donald Trump and former Vice President Joe Biden, the winner would be:

I found this description of the Proud Boys:

The group was founded in 2016 by Gavin McInnes, a political commentator and the co-founder of Vice Media. The group existed informally online before McInnes began planning formal meetings in New York through a far-right publication, Taki's Magazine.

While the group officially rejects the notion of white supremacy and deny they are part of the "alt-right." They consider themselves "western chauvinists" who want to spread "anti-political correctness." 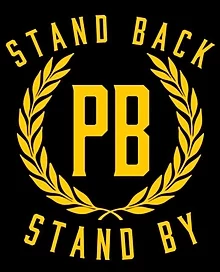 The New Yorker reports that the Proud Boys began distancing themselves from the alt-right in 2017, following the attacks of alt-right members against counter-protesters in Charlottesville.

"They care about the white race. We care about Western values,” McInnes said.

The Proud Boys also embrace political violence against leftists. The group has battled with Black Lives Matter protesters in Oregon throughout the summer. The New York Times also reports that the group instigated violence against self-described anti-fascists in New York in 2018.

The Presidents' words spawned an on-line celebration by the Proud Boys:

Members of the group praised Trump's choice of words during Tuesday night's presidential debate, his first against Joe Biden, resharing his remarks and even embedding the words in a new graphic with their logo.

"Standing by sir," one user who identifies with the group wrote on the social-media app Telegram, according to Mike Baker, a correspondent for The New York Times.

"President Trump told the proud boys to stand by because someone needs to deal with ANTIFA...well sir! we're ready!!" another organizer, Joe Biggs, posted.

It could be that Trump, defiantly not wanting to give in to debate moderator Chris Wallace and Biden by using the words "stand down," chose instead to say "stand by."  Although some Democrats and more liberal members of the media immediately jumped to the conclusion that Trump was doing a clever dog whistle to his white nationalist supporters, I believe that way overstates Trump's intelligence.  Trump quite possibly did not grasp in the heat of the moment the YUGE difference between the two phrases.

Today will be telling. Trump can clarify his Proud Boys comment and condemn the organization. (It needs to be done directly by him, not by campaign surrogates.)  Or he can let his "stand by" comment, well, stand, encouraging violence in the streets and, possibly, at the polls on November 3rd.  Even though it would hurt him politically, my guess is Trump will choose the second option.  Why?  Because, at the end of the day, Donald Trump is just plain stupid.