No, the Biden Campaign Should Not Be Knocking on Doors; Death of Justice Ruth Bader Ginsburg

Michael Moore, liberal propagandist (no he is not a "documentary maker"...please do not put him in the same category as Ken Burns), is sounding the alarm!!!  Biden volunteers are not knocking on doors!  No ground game!

Over at The Week, Bonnie Kristian writes a column lamenting how the Biden campaign is failing because it is not knocking on doors, ostensibly due to the Covid-19. Kristian is dismissive of the excuse and talks about how effective door knocking is as a campaign tool.

I think I know something about the subject.  I've literally knocked on thousands of doors as a candidate and campaign volunteer.  I have also taught a campaign strategy class.

Yes, door knocking is a great strategy - for down ballot candidates who are not well-known to the voters.  In those campaigns, the most effective option is for that candidate himself or herself to have contact with the voter.  Next best option is to have a campaign volunteer knock on the homeowner's door. 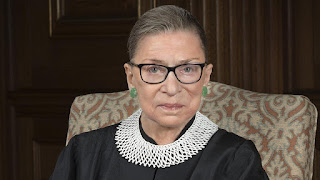 But those are low information races in which the voters do not know much, if anything, about the candidates. They're basing their decision on what little information they have.  A candidate or candidate volunteer's visit to the voter's door is hugely impactful to those voters.

Presidential contests are not low information events.  About 99% of voters know Trump and Clinton.  About 95% of them have already decided how they're going to vote.  You're basically looking for the 5% of undecided voters...a little like finding a needle in a proverbial haystack.   Even if successfully in locating that 5%, a campaign volunteer is simply transmitting information that the voter can get from literally hundreds of other sources.  In terms of person-to-person contact, family members and friends are likely to be much more persuasive on a voter's decision in the presidential race than some stranger knocking on their door.

Then, of course, you have the fact that a door knocking is extraordinarily labor intensive and expensive.  Human and capital resources of a presidential campaign are much better spent in other voter outreach efforts, such as texting voters or phone calls.

No, even if we were not in the middle of the worst pandemic in 100 years, presidential campaigns should not be wasting time and money knocking on doors.

Joe Biden leads in virtually every swing state, including by large margins in Wisconsin, Arizona and, yes, Michigan.  His campaign is flush with cash while the billion dollar Trump campaign is so broke it is pulling ads off the air in key battleground states.  It is hard to imagine the Biden campaign being in better shape.  Democrats have such a long history of campaign paranoia that it has a name - bedwetting.