In 2012, Psychology Today published an article written by Joe Navarro, formerly an FBI profiler and founding member of the its Behavior Analysis Unit.  In that capacity, Navarro studied Jim Jones, leader of the People's Temple (pictured below), David Koresh, who led the Branch Davidians,, Charles Manson, and numerous others cult leaders, not just in the United States, but from around the world.

In the article, Navarro provides a lists 50 "typical traits of a pathological cult leader that you should watch for."  Below I provide Navarro's list, emboldening the ones that I believe apply to President Trump and his followers: 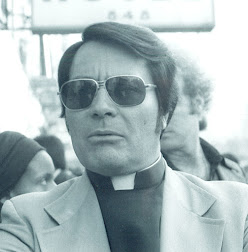 By my count, Trump has 45 of the 50 characteristics of a personality cult leader.  Again, let me emphasize that Navarro came up with this list in 2012, three years before Trump announced as a candidate.
***
OOPs short takes:
Posted by Paul K. Ogden at 2:32 PM

Hope we can Hitlerism and Jim Crowism in Trump and Barr