In the Spring of 1989, a democracy movement was emerging in China.  Beginning on April 15th of that year, protests by dissidents pushed for Communist government to provide constitutional due process, and end corruption, and to allow democracy, freedom of press, and freedom of speech.

In May, a student-led hunger strike further galvanized support for the movement.  Hundreds of thousands of people in 400 cities to took the the streets and public squares to protest, peacefully, against the repression they had long endured under the Chinese Communist dictators and to plead that
they be given American-style freedom.

Chinese leaders saw the freedom movement as endangering their power.  They declared martial law and mobilized the military.  Reporters were kicked out of the country.  Chinese officials did not want any outside, first-hand reporting of what they planned to do.   On June 4th, the military started shooting the protesters.  In what became known as the Tiananmen Square Massacre, thousands of peaceful demonstrators and bystanders were killed.

The Chinese government's slaughter of its freedom-seeking citizens was roundly condemned by the President Bush, members of Congress, the international community and human rights organizations.  The American public was united in supporting the protesters and  and horrified that the Chinese government would slaughter its own citizens for merely demonstrating for freedom.

That last statement is inaccurate if the term "united" used in that context indicates unanimity of thought.  There was a certain prominent 43 year old New York real estate developer who opposed the demonstrators and supported the Chinese government's action in violently putting down the movement.

In a March of 1990 Playboy interview, then private citizen Donald J. Trump complained about the the burgeoning freedom movement taking place in the then Soviet Union and faulted Russian President Mikhail Gorbachev for "extraordinary weakness" and not having a "firm hand."  Trump said the failure to crush the movement would "end up costing him

In the same interview, Trump praised Chinese leaders for acting with "strength" by slaughtering the Chinese protesters and putting a stop to the freedom movement.  Lest anyone think, time and reflection saying the Chinese government was right to act because the peaceful protesters were engaged in a "riot."
would soften Trump's views toward the Chinese protesters, during a 2016 Republican primary debate defended his 1990 comments

During Monday's phone conversation with the nation's governors, Trump chided the states' leaders for not forcefully putting down the demonstrations.  He called on the governors to "dominate" the protesters, to start arresting them and handing out lengthy jail sentences.  Later that same day, Trump gave an address from the Rose Garden in which he said many of the protesters were involved in "domestic terror."  He called himself the "law and order" President and indicated he was dispatching thousands of military personnel and law enforcement to Washington, D.C. to stop rioting and violence.  He called on the country's governors to mobilize the state militias to stop violent riots taking place in their cities.  Trump said if the governors failed to take action, he would use the Insurrection Act to send active duty military personnel to the states to crush the riots and stop the violence. 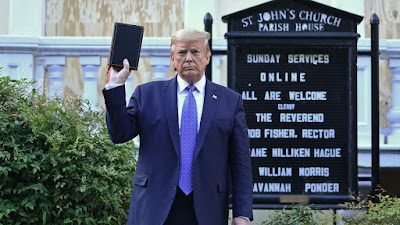 At the same time that Trump was giving that Rose Garden speech, federal law enforcement officials, on the order of Attorney General Bill Barr, began to violently disperse a peaceful group of protesters who had assembled at Lafayette Square Park across from the White House. Protesters were hit with tear gas (and yes, the pepperballs used are "tear gas" which is a general classification of chemical irritants according to the CDC), exploding rubber shrapnel bombs, and smoke bombs.  Once the crowd was dispersed, Trump engaged in a planned a "show of strength" by walking across the street to the St. John's Episcopal Church for a photo op involving Trump standing before the closed church awkwardly holding a bible.  Trump never opened the bible, did not offer a prayer and did not call for unity and peace in these troubled times.  The church and bible were just props to him.

As evidenced in the 1990 Playboy interview on through his presidency, President Donald Trump has long held nothing but disdain for people exercising their right to assemble and protest against the government.  He sees them all as "rioters" and believes it is the job of government to quickly crush any public opposition to those in power.

Trump supporters like to claim they are "patriots."  But the President they slavishly worship is anything but a patriot.  Donald J. Trump holds values about the exercise of autocratic power that is antithetical to the democratic values and freedom that has long made America great.
Posted by Paul K. Ogden at 2:03 PM