About that CNN Poll...

This week, the Trump campaign sent a cease and desist letter to CNN claiming its June poll which showed the President running 14 points behind Biden nationally was defamatory and was aimed at suppressing the Trump vote.  The letter, which demanded CNN stop using it, was based on a critique of that poll (allegedly) written by the Republican polling outfit McLaughlin & Associates.

I use the word "allegedly" because if you read the McLaughlin critique, much of it has the tone not of a professional pollster criticizing a colleague's methodology, but instead a Trump Twitter rant.  McLaughlin & Associates, I should point out, is ranked as a C/D pollster by FiveThirtyEight, one of the 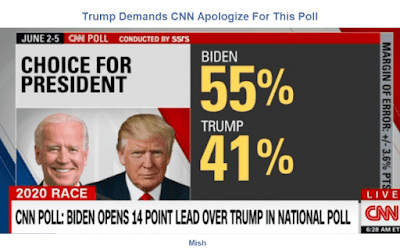 That the Trump campaign could find an attorney, Jenna Ellis, willing to sign such a ridiculous letter speaks poorly of my profession.

Media outlets employ independent pollsters, usually from outfits that have bipartisan ownership.  The notion that these pollsters put their finger on the scale to make a particular candidate look good or bad is absurd.  There are pollsters out there who do that, but they work for candidates, not the media, and they keep their methodology a closely guarded secret lest the polling flaws undercut the poll numbers they obtained for their clients.

I would add the notion that the CNN poll, which was conducted by the independent research group SSRS, is aimed at suppressing the Trump vote in the fall is ludicrous.  A poll showing Biden with a commanding 14 points ahead, is just as likely, if not more likely, to cause Biden voters to stay home as Trump voters.   Arguably, one of the reasons Hillary Clinton probably lost in 2016, were her voters, convinced she would win comfortable because of polls that showed her ahead, stayed home. Nonetheless, it is June.  How is a poll in June going to cause suppression of the vote in an election five months away?

Exit polls always show higher levels of partisanship than in-person phone poll interviews, which is considered the most accurate way to poll.  Nonetheless, a pollster does not set out to pick a certain amount of Republicans and Democrats to sample.  (It should be noted that the 25% Republican sample in the CNN poll was in line with numerous other telephone polls)  But the methodology pollsters uses does cause a variation in the sample obtained.  That is why when looking at polls, it is best to compare the poll result to a previous result reached by the same pollster. (Pollsters do not switch out the methodology they use from one poll to another.)  In short, the number one thing you are looking for when analyzing polls is MOVEMENT.

In a CNN poll released in mid-May, Joe Biden had a 5 point nationally over Donald Trump.  Three weeks later, the same pollster using the same methodology found the margin was 14 points.  Even if every criticism McLaughlin said has merit, it does not undercut the the importance of that 9 point swing in Biden's favor in just three weeks.

But polling aberrations happen, so one should look at other polls to see if they record similar movement in Biden's favor during the same period.  The Hill/Harris X poll tends to render better results for Trump than other polls.  In mid-May, that poll had Biden ahead by only 1 point.  In early June, less than three weeks later, another Hill/HarrisX poll showed Biden up 10 points.  A weekly Economist/You Gov poll released at the end of May showed Biden ahead by 3 points.  A week later, the lead was 7 points, and another week later, it was 8 points.

In short, the CNN polls might have been on the high end in terms of showing the size of the Biden national lead.  But that does not make the poll illegitimate or biased.  The most important result is the CNN poll showing substantial movement in Biden's favor, which movement is confirmed by other polls.   That doesn't mean Biden's undeniable national lead is insurmountable or the national race won't tighten down the road.  It almost certainly will.

Of course, with the Electoral College, national polls mean little anyway.  The result of polls in swing states are much more important.  That is a topic I will return to on several occasions before November's election.
Posted by Paul K. Ogden at 2:18 PM