Will Trumpism Domination of the GOP Survive a Trump Election Loss?

I recently have had the opportunity to listen to two podcasts that discussed the future of Trumpism and the Republican paty should Trump, as is becoming increasingly likely, loses his bid to be re-elected.

On the Lawfare podcast, Steven Teles, the author of the book "Never Trump: The Revolt of the Conservative Elites" takes the position that populism reflected in Trumpism will continue to dominate 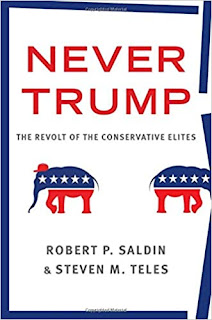 the Republican Party and that the conservative intellectual opposition to Trump (unfortunately often referred to as "Never Trump") will become a minor, but critical, faction of the GOP that Trumpist Republican candidates will need to court to win.

Benjamin Wittes, the host of the Lawfare podcast and a Senior Fellow in Governance Studies at the Brookings Institute, demurred with Teles' view.  Wittes contended that while Trumpism will survive Trump, Never Trumpers will leave the GOP and  join the Democratic Party.

Meanwhile on the Bulwark podcast, Republican strategist Mike Murphy, argued that in the wake of a Trump loss, Trumpism as a dominant force in the GOP would be sidelined.  He argued that Trump's influence on the Republican Party would quickly fade with an election loss.  According to Murphy, while Trump is likely to stay in the news attacking Democrats and political opponents, Trump is likely to be politically neutered, a minor player in GOP politics.

Charlie Sykes, longtime consevative Wisconsin radio personality and host of the Bulwark podcast disagreed.  While Sykes agreed with Murphy that Trump would be a presence on the sidelines attempting to influence politics from the periphery, Sykes believes that venture will prove to be much more successful for Trump.  Sykes believes that if Trump loses, he will set up shop at some media outlet (maybe acquire a small network like OAN, One America News) and turn it into Trump TV.  Sykes sees Trump as being the leading GOP presidential candidate in 2024 should he lose in 2020.

Murphy disagreed with Sykes' view.  He thinks Trump's age (he would be 78 in 2024) and likely future health problems (see Trump's obesity, opposition to exercise, and fast food diet) will militate against any thought of  running for a non-consecutive second term.  Further, Murphy thinks Trump, with a big election loss on his resume, would not be an attractive presidential candidate for Republican voters in 2024.

All four commentators assume the GOP survives intact post-Trump.  A few months ago, I would have wholeheartedly agreed  Now I am not so sure.  Certainly, two parties will continue to dominate American politics.    But I am not sure the Republican Party, in current form, will survive Trumpism.  While the Republican name may living on, the GOP may have to be rebuilt from scratch.  Trumpism pretty much has destroyed the conservative foundation of the Republican Party.  There is nothing remotely "conservative" about Donald Trump.

I have long argued that the GOP needs to be more populist.  The GOP needs to focus on helping working men and women, not using the tools of government to hand out corporate welfare to wealthy corporations who then hand out millions in bonuses to their top executives.  In short, Republicans need to be more supportive of Main Street and less supportive of Wall Street.

But Teles' view that Trumpism = Populism seems off-base.  While Trumpism sounds populist, in practice Trump has not shown the slightest interest in policies that actually help working men and women.  Instead, Trump has proven himself to be all about making rich people richer.

Trumpism is not populism.  Trumpism is a personality cult.  At that head of that cult is a charlatan who has exploited people's anger and grievances for his own selfish ends.  For Trump cultists to wake up and realize they have been duped by a con man who cares nothing about them or the country, is not going to happen overnight.  People do not like to admit that they have been fooled.

As to the Sykes-Murphy debate, both argue that Trump, post-election, will play a role in GOP politics.  Sykes just believes Trump will be more successful in that role that Murphy.  I agree with Murphy that, especially if Trump loses badly this fall, his career as a political candidate, will be over.  No Trump second term.  But I agree with Sykes that Trump will continue to play an outsized role in influencing the Republican Party, particularly in the area of candidate endorsements heading into primaries.

But winning primaries is worth nothing if one can't win in November.  The indelible stain of Trumpism though will continue to haunt GOP prospects when it comes to winning general elections.  If the Republican Party is to continue be a bulwark to the increasing left-ward drift of the Democratic Party, the GOP may need to reassemble and reorganize itself.  Certainly the conservative foundation of the Republican Party will need to be rebuilt and that will take a long time.
Posted by Paul K. Ogden at 1:13 PM