In 2016, Donald Trump won Michigan by a margin of only 10,704 votes.  The upset win in Wolverine state was key to Trump, while losing the popular vote, narrowly winning in the all-important Electoral College.

The Trump boat in Michigan is leaking badly.  Instead of bailing out the water to keep the ship afloat, 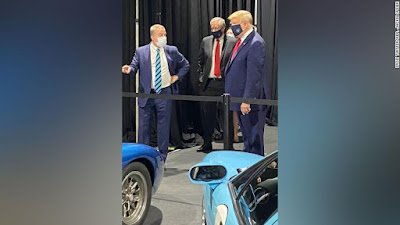 Donald Trump is working hard to ensure his chances of winning the state end up at the bottom of Lake Superior.  Trump has been engaging in an ongoing war of words with Michigan's popular governor, Gretchen Whitmer, over her stay-at-home orders.  (FYI, I actually think Governor's Whitmer's executive orders go too far and are poorly designed in several respects.)  Then this week when thousands of Michigan residents were dealing with having their homes washed away in floods after two dams broke, Trump threatened to withhold disaster relief to those residents because Michigan's Secretary of State, a Democrat, ordered a paper ballot mailed to every registered voter in the state.

Of course, Trump had his facts wrong.  The Secretary of Sate sent to voters applications for absentee ballots, not ballots, which is exactly what many of her Republican colleagues are doing in their states. Nonetheless, telling voters you want to make it harder for them to vote, in the midst of a pandemic, and that you are willing to use disaster relief to punish Michigan residents who elected those Democrats he dislikes so much...well that's not a good look.

Then yesterday, Trump took a tour of a Ford plant in Michigan.  Even though the Ford's rules require a mask at the facility Trump refused to wear one...at least when he knew could be on camera.  Further, Whitmer's executive order requires people to wear face coverings in enclosed public spaces where the person might encounter others.  Instead of setting a good example, Trump, the faux populist, sent the clear message that he is above the rules everyone else living or visiting Michigan must follow.

People do not like that "I'm too important to follow the rules everyone else must follow" attitude from politicians.  I know that all too well from my childhood.  My father was a yellow dog Democrat.  But there was one Democrat he turned against, three term Indiana Senator Vance Hartke.  Why?  Well, soon after airport security checks became the law of the land in the 1970s, Hartke, claiming congressional immunity, refused to go through security.  My father never forgot that incident.  Not only did that act of arrogance cost the Senator my father's support (he passed away before he could vote in the 1976 election) but that of many Hoosiers who tossed him out of office in favor of Richard Lugar.

Don't be surprised if at some point in the not too distant future the Trump campaign writes off Michigan.   The Trump campaign winning Minnesota is a much more realistic possibility at this point than Michigan.
Posted by Paul K. Ogden at 3:17 PM