City Needs to Be Smart About Blue Indy Parking Spaces 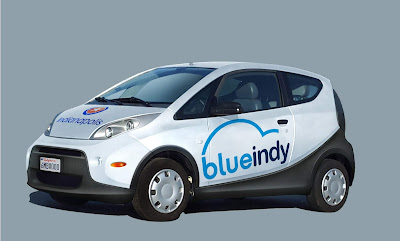 The City of Indianapolis is asking for input on what to do with the 400 or so Blue Indy spaces as the electric car service closes shop here.

For those who have offices or businesses around the City-County Building (CCB), the Blue Indy fleet
has long been the source of much derision.  People laughed that the cars were never used except by Blue Indy employees occasionally moving them around.  Even my most ardent tree-hugging friends thought the program was idiotic.  For people wanting to make a quick trip to visit a government office or downtown merchant, the scores of spots taken up by Blue Indy around the CCB meant they have to park in an expensive parking garage or park several blocks away at a meter and walk.  Needless to say, this experience was much worse during the winter.  It did not help my mood that during those long cold walks I passed by numerous Blue Indy cars taking up much closer metered
parking spaces.

Indianapolis Star writer James Briggs, who by the way has free downtown parking available to him next to his place of employment, claims Indianapolis does not have a parking problem.  Indeed, there is generally not a problem finding an open parking garage during the day or street parking at night.  But finding a street parking space during the middle of the day in many parts of downtown can be next to impossible.  The option to pull into a garage means, instead of paying maybe $1 to park at a meter, you could be paying the garage $8.  People do not want to do that when their errand will only take a half hour or so.

There is another thing that is constantly overlooked.  Under the city's fifty year contract with ACS dba Park Indy, Indianapolis can only take so remove so many metered parking spaces.  Once that cap is reached, the city has to pay Park Indy for any additional spaces as if they were occupied 100% of the time. With the Blue Indy program and other projects, we may well be beyond the cap.

The Blue Indy program and the 50 year parking meter contract were just two of the many bonehead ideas launched by former Indianapolis Mayor Greg Ballard.  As a lifelong Republican who enthusiastically supported him when he first ran, Ballard proved to be an embarassment.  Republican Ballard never hesitated to use taxpayer money to subsidize private developers (which also happen to be his political contributors) in his many corporate welfare schemes.  (Remember when Ballard wanted to build a cricket complex so that Indy could host the world championship?)  When it came to tax increases, Ballard always supported them.  Always. I lost count at about 40 tax/fee increases he proposed.

Ballard's replacement, Joe Hogsett, is a far from perfect.  However, Hogsett seems at least willing to listen to the public's input and understands the need for flexibility in urban planning.  The Indianapolis Star reports on Mayor Hogsett's thoughts about what to do with the Blue Indy spots:

"We continue to be mindful that the best solution may look different on a station by station or on a neighborhood by neighborhood basis," Mayor Joe Hogsett said Wednesday. "One size does not necessarily fit all."

The Star goes on to quote Hogsett policy advisor Maczenski Higgins who talked about learning lessons from Blue Indy's demise.  She cited, as lessons learned, the need for flexibility when designing these types of programs due to changing technology and trends, and the need to consider community input.   Exactly!  After eight years of the Ballard administration locking the city into long term commitments, such as the 50 year parking contract, and not being the slightest bit interested in community input, it is refreshing to listen to an administration talking about a more thoughtful approach to municipal planning.

It could well be the Hogsett administration's deeds will not match its rhetoric when all is said or done.  But at least its good to at least finally hear the words.
Posted by Paul K. Ogden at 1:34 PM