Indianapolis Political Leaders Wagered the Future Would Look Like the Past ... It Was a Bad Bet

In anticipating what Indianapolis would look like deep into the 21st Century,city leaders bet heavily that it would resemble what it looked like in the past.  They built a big downtown mall for shopping.  They subsidized professional and amateur sports, expansions of the convention center, downtown hotel and office developments.   Indianapolis even gave away control of street parking meters with a 50 year lease that provided guaranteed income to the vendor should those spaces not be used for parking.  City officials are now in the process of spending hundreds of millions of dollars to upgrade the bus system. 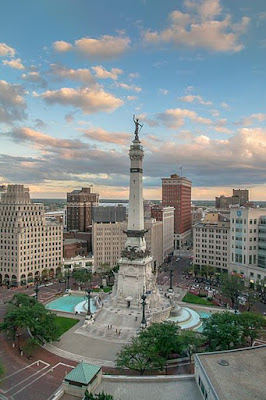 City leaders envisioned that, in the future, huge throngs of people would continue to pack into Indianapolis downtown venues for shopping, conventions and sporting events.  They saw no end to people driving private vehicles (although they tried to encourage people to ride the bus) to their white collar jobs in big downtown office buildings.  They thought gentrification, the movement of younger, upwardly mobile people downtown, would continue for several decades to come.

These bets about Indianapolis' future were always made using taxes paid by hard working men and women.  Often they were part of "public-private partnerships," which means the public assumes the risk while the private companies, usually big political donors to the mayor's campaign, get the profits.

When you look at the bets Indianapolis city leaders made about the future, it was almost always that what happened in the past would continue to define the future.  The sole exception was city leaders believing fossil fuel vehicles were on the way out.  They bought hybrid and electric city vehicles, electric buses, and allowed a private company to operate an electric car rental company using prime Indianapolis city parking spaces.  The electric car rental business failed.   As far as the aforementioned 50 year parking meter contract, just ten years in city leaders are desperately looking to break the lease.

It is not clear whether the Covid-19 crisis will cause changes to American cities or whether the pandemic is merely speeding up changes that were already in the works.  Clearly, people shopping at malls is on the way out.  But so too are companies and groups holding large annual conventions.  (Yet, Indianapolis city leaders kept insisting on expanding the convention center to get a bigger piece of a clearly shrinking pie.)  Telecommuting has been an option for a number of white collar workers for years, but it was never well-developed before the current crisis.

The Indianapolis of 2050 is unlikely to look anything like it looked in February 2020.  Driverless cars do not need street parking.  Increased telecommuting will decrease the need for office space and reduce vehicles on the road.  Air pollution will decrease.  The crowds downtown will dwindle.  People will shop even more online as retail businesses continue to fail.  The movement of people from large cities to the suburbs, exburbs and even rural areas, originally fueled last century by better private transportation, will resume thanks to telecommuting. Gentrification may well turn out to be a fad.  People do not need to live close to their jobs and shopping when they can merely walk steps to their home office and shop on-line.

Indianapolis leaders bet Indianapolis 2050 would look it did in the past.  It was a bad bet.
Posted by Paul K. Ogden at 1:14 PM

If it's not clear to you, consider reading The Fourth Turning, written in '97 I believe. I think it might help give clarity.

Thanks, Aaron, I'll check it out.

Some of the same questions could be asked regarding the building sprees occurring on Indiana's public college campuses, especially IU. Will remote learning make these obsolete?