Their reasoning goes like this:  Barack Obama won the state in 2008 and 2016 by 4.5% and 3% respectively.  But in 2016, Donald Trump won by a comfortable 8%.   While Ohio has one elected U.S. Senator - Sherrod Brown - all statewide elected officials, including the Governor, are Republican. The GOP also has strong majorities in both chambers of the state legislature.

However, a closer look at the data suggest Ohio, with its sizable 18 electoral votes, is very much in 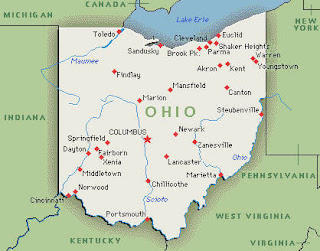 When Donald Trump won Ohio in 2016, he did so with just 51.3% of the vote  That translated into an 8% win only because so many voters in Ohio (5.5%) voted for third party candidates.  Most of those voters were no doubt casting protest votes because of their unhappiness with the two major party candidates.  If the Democrats had run a more popular candidate than Hillary Clinton, many of those voters would have cast a vote for their nominee and the result would have been much closer than 8%.

The 2018 midterms also strongly suggest Ohio likely being a swing state in 2020.  Although Republicans held their ground in state senate races, the GOP lost five seats in the state house in 2018.  And, while Republicans did sweep all the statewide offices in 2018, the GOP winning margin in each race was dramatically down from what it was in 2014.   Below is a table showing those declining victory margins:

It is not hard to figure out what happened in Ohio in 2018.  There was a dramatic increase in turnout in 2018 over 2014, over 40%.  While Republican statewide candidates greatly increased their vote over 2014, Democratic votes went up even more.

Ohio is not like other midwestern states like Wisconsin or Iowa or Minnesota. Ohio has a lot of large and medium sized cities.  It is the seventh most populated state in the country and tenth as to population density.  While those Ohio cities have always been the source of most of the Democratic vote in the state, those urban votes have ben in recent years cancelled out by suburbanites and rural residents voting Republican.  In the age of Trump, that has changed.  Many of those suburbanites who used to vote as a block for Republican candidates, are now voting for Democrats.

That a candidate like Joe Biden could prove very competitive in a more urban midwestern state like Ohio is borne out by the polls.  A Marist poll released on Monday shows Biden ahead of Trump 49-45 in Ohio.

While Biden should avenge Hillary Clinton's loss of Michigan and Pennsylvania in 2020, winning more rural and white Wisconsin will be much more of a challenge.  Likewise, similarly demographic Minnesota and New Hampshire, won by Hillary in 2016, could well fall to Trump in 2020.  Ohio though makes up for the loss of those three states, and gives the Biden a 273-265 electoral college edge, even if you spot Trump every other swing state he won in 2016, including North Carolina, Arizona, and Florida.