Despite Warnings of Medical Supply Shortages Created by Pandemic, the Trump Administration Gave Away Critical PPE to China

As early January, U.S. intelligence warned the Trump administration and Congress about a new virus strain in China and the possibility that it could become a pandemic that made its way to the United States.  Throughout January and early February, increasingly dire reports were issued by intelligence agencies warning about the growing spread of the virus, by then identified as Covid-19.

It was not like the Trump administration had not been prepped about what steps to take should a pandemic come to the United States.   Days before Donald Trump's inauguration, the incoming administration was put through a simulation calling for a response to a pandemic that originated in Asia.  Part of that exercise included a warning that the pandemic could create shortage of personal protective equipment that would put the lives of health care providers at risk.

Instead of learning from the exercise, the Trump administration ignored its lessons, ignored CDC's playbook for dealing with a pandemic, and ignored the U.S. intelligence agencies warning about that China was not being honest about its containment of Covid-19 and that it could well spread to the United States.  Instead Trump downplayed the danger of the virus coming to the United States and instead heaped praise on his "friend" Chinese President Xi Jinping, on January 24th tweeting:


"China has been working very hard to contain the Coronavirus. The United States greatly appreciates their efforts and transparency. It will all work out well. In particular, on behalf of the American People, I want to thank President Xi."

Two weeks later, on February 7th, the very day the World Health Organization warned that there was a worldwide shortage of personal protection equipment (PPE) needed to fight the virus, the Trump administration announced it was sending 17.8 tons of "masks, gowns, gauze, respirators, and other vital materials" to China." 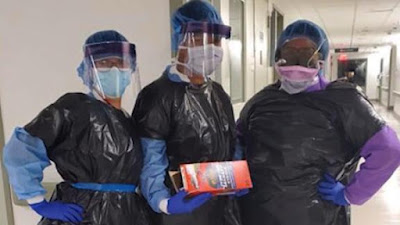 Our federal government failed the pandemic test.  Spectacularly.  Thank God we have competent governors who are qualified and unafraid to provide the leadership the Trump administration is apparently incapable of.
Posted by Paul K. Ogden at 6:01 PM