For two weeks, I've been eagerly waiting for the Marion County Election Board to release the election results, by precinct, of the Indianapolis municipal election.   There is no better gauge of what is going to happen in the future, than to look at election results, make adjustments, and ascertain the trends the data represent.  The best data to determine the partisanship of an area is to look at the result of baseline races.  Baseline races are races down the ballot where voters generally do not know
the candidate and they default to voting their party.  Races like county surveyor, county recorder, etc.

Unfortunately, the races contested in the 2019 municipal elections in Indianapolis do not provide a good baseline.  The mayoral candidates are too well known, and even local council races might feature candidates familiar to voters in their district.  Plus, council candidates sometimes run unopposed, which throws off the overall D-R numbers in the county. 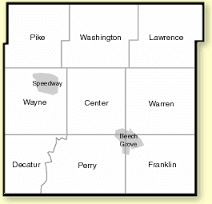 For my analysis, I decided to take a look at the Mayor's race.  In 2015, Democrat Joe Hogsett won his first term as mayor by defeating businessman and political novice Republican Charles Brewer 62% to 38%.  In 2019, Hogsett faced a more politically experienced opponent, State Senator Jim Merritt, and won even more convincingly, 72% to 27%.

Below is a table showing how many precincts the Republicans won in the 2015 Mayor's race versus 2019, broken down by the old city limits (the wards which are mostly, but not completely in Center Township), and the township precincts that are not part of the city wards.

These precinct numbers should be a red flashing light to the Indiana State Republican Party.  Many Republican state legislative districts include a significant number of Marion County precincts if not a majority.  While the last redrawing of the General Assembly maps extended those districts into the GOP heavy suburban doughnut counties, that may not be enough to save them.  Hamilton County, for example, saw an acceleration in a Democratic trend, so much so that Democrats won city council seats in Fishers and Carmel.

Furthermore, the Marion County and suburban trend toward Democrats show the vulnerability of GOP statewide candidates who will be on the ballot in 2020, including Governor Eric Holcomb.
Previously, I documented how the statewide GOP candidate numbers were significantly down from 2014 to 2018.  But those mid-term elections tend to be much better for Republicans and thus GOP statewide candidates can lose a significant number of votes and still comfortably win. That's not the case with presidential election years when Democrats tend to be more competitive statewide.
Posted by Paul K. Ogden at 12:06 PM

What? No mention of how Trump has subverted the Marion county Republicans? The horror! Light now shines in the darkness?
Indiana State Republicans would do well to purge Marion County sorts from any State leadership positions. Wise, too, would be to purge them out of any Legislative leadership roles. To paraphrase an authority, you know the trees by the fruit they produce and manure ain't going to help Marion County sorts recover Republican roots and to grow then, Republican fruits. Part of the recent tape going around notes that Marion County Republicans have no principles. Leadership, (not Cindy) has been self serving and not at
all interested in or capable of party building. Heck, their manual for the few PCs they have dates from 2010. With PE gone to his rewards that leaves only Fred to bankroll the party. He sure has not seen a good government pay off for his investment.
Old rule in politics be that you can't beat something with nothing. R Mayor candidates have been as close to nothings as one could
imagine. Actual collusion in the Peterson v Ballard contest was overcome only by Tea Party Sorts (according to the tape going around...but the source of that observation is suspect). R party rot at the top evident by the MC sorts subverting the Indiana State Platform to smuggle in (in their typical underhanded fashion) yet another surrender to the barbarians. Their pathetic treatment of Charlie White is still remembered as is their current slobbery over the Indiana AG Hill.....MC R's in drag. No reason to vote Republican was offered voters while plenty of reason to stay home existed....The slob's treatment of the best City Council member you have already covered but not all the sordid details of the greaser they recruited, had him move into her district, ran him against her in the primary. Her endorsement of Boot carried more weight in that district than anything the R's had (to include, however, a superior candidate buried by R incompetence).
did you wish to be invited to the next meeting to poke around in the entrails of that dead dodo?

If we could find another middle-of-the-road Democrat like Evan Bayh with long coattails, Indiana will be a solid blue state again. Look at the embarrassment that is the AG. Maybe the GOP will dump Hill at their convention next year. I know you have no love for the disciplinary committee but would you rather see them remove the AG or let him be a drag on another bad ticket?

Well well Speaker Bosma bailing out because he knows he’ll be 1. Defeated in his home district 2. See the Legislature turn to majority Democrat in 2020. Along with a Democrat sweep of state offices, a Democrat Socialist President, and a Democrat House and Senate.

WORKERS OF THE WORLD UNITE!!!!!

Anon 7:39, no fan of Curtis Hill. Didn't vote for him at the convention because of his 1) position that marijuana laws should not be relaxed and we should step up enforcement; 2) his threatening of a reporter who did a story on his handling of a jail; 3) his ridiculous felony murder prosecution of those kids who broke into the house and the homeowner ended up shooting and killing one of them. (Obviously not felony murder... he insisted on taking the case all the way to IN SCT.)

For Curtis Hill to lose his job, he'd have to be disbarred or get a very lengthy suspension (we're talking years, not a few months). I think that would be extremely excessive I do find it remarkable though the Commission is throwing so many resources at Hill, while letting others go who have more serious misconduct directly related to their duties as attorneys.

I just checked my home precinct and Merritt did MUCH worse than his predecessor. The mayor won it by 15% MORE than he did last time OR 89% AS OPPOSED TO 74% LAST Time. My neighborhood voted 91.5% for the mayor as opposed to 82.5% last time. I have hard time believing that there are only 33 R's in precinct, but that's what there. The Republican Party,as we know it, no longer exists in Marion County AND Trump is certainly NOT helping. Likewise, until Evan Bayh, Dem's were lucky to get 43% in Washington Township. NOW, as of 2018, in theh only contest Township race, Small Claims Judge, theh Dem got 73%. Finally, if you look at the Rep vote, it's concentrated in the southern three townships, but the LEADERSHIP is from theh NORTH side, as it has been, tradtioanlly.