Why are NRSC Campaign Resources Being Used to Sell a Senator's Books? 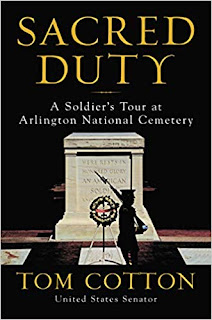 The last few days, I've received in my email inbox solicitations to buy Arkansas Senator Tom Cotton's new book "Sacred Duty: A Soldier's Tour at Arlington National Cemetery."   What I found perplexing is that the solicitation came from the National Republican Senatorial Committee, an entity which bills itself as "the only national organization solely devoted to strengthening the Republican Senate Majority and electing Republicans to the United States Senate." Why in the world is an officially established party political action committee involved in a non-political activity, i.e. selling books?

When I dug into the NRSC website, I found an entire page devoted to selling Cotton's books.  It would appear that by making a large enough "contribution" ($35 or more) to the NRSC, one can receive a Cotton book.  By the way, one can buy a hard cover copy of the book on Amazon for $14.49.  The fact that hard cover copies of the book are priced that low on the open market suggests they were not selling.  That might have been the reason, Cotton turned to the NRSC to sell his books.

But how does the arrangement work?  Did Cotton donate his books to the NRSC to sell?  Or did the NRSC buy a bunch of Cotton books that it is now hawking on its website and in GOP emails?   Or is the NRSC selling the books for Cotton on consignment?   Is Cotton personally profiting off the sale of these "Sacred Duty" books?  Is the NRSC splitting profits with Cotton?

I would note that although political resources are being used to sell Cotton's book, Sacred Duty, the book is applauded for keeping politics out of the book.  Apparently politics though is not being kept out of the selling of those books.

It could well be legal.  But being an attorney and somewhat knowledgeable about the restrictions on campaign expenditures, the arrangement raises major red flags.
Posted by Paul K. Ogden at 10:10 AM

Yes, that is the only entity to ever give away a Senate Seat in Alabama. I wouldn't give them a dime.