Businessman John Schmitz felt Indianapolis voters should have more options than the Democratic and Republican nominee, which two candidates were hand-picked by party bosses during endorsement conventions proceeding the primary.  Schmitz filed to run as an independent candidate for Mayor.  To qualify for the ballot, Indiana law requires that Schmitz obtain signatures of a certain percentage of Marion County registered voters.  Working tirelessly, Schmitz and his campaign team obtained 8,295 signatures of Indianapolis voters on petitions submitted to the Clerk’s Office.

The Marion County Democratic and Republican parties though have a long history of using Indiana’s petition requirement to exclude candidates and limit the right of Indianapolis voters to choose someone other than Democrats and Republican candidates preferred by party bosses.  Schmitz experienced this first-hand when the Marion County Election Board[1] voted 3-0 to disallow thousands of voter signatures Schmitz had obtained, leaving him 749 short of the required 6,106 signatures needed to qualify for the November ballot.

Schmitz, through his attorney Mark Small, filed for relief with the Southern District of Indiana.  (See attached “Complaint and Request for Preliminary Injunction”.)  Today, at 2 pm, Judge Tanya Walton-Pratt will be conducting a hearing on Schmitz’s request for injunctive relief, i.e. to be placed back on the ballot.

Marion County party bosses should not be permitted to use Indiana’s petition requirement to exclude candidates from the ballot and limit voter choices.  Indianapolis voters deserve better.  The hearing today presents a very important principle that is a matter of considerable public concern and interest.  I hope you will consider attending the hearing and covering the issue.

[1] In Indiana, county election boards have three voting members, including the County Clerk and an appointee of the county Democratic and Republican chairman.

I drive on Indianapolis downtown city streets often.  I also go to Broad Ripple, about once a week, to catch up with a friend.

Those experiences have changed dramatically this summer.  The last several weeks, I've found myself snarled in long traffic jams on downtown streets, waiting through multiple several cycles of the traffic line before I can move through an intersection.    As far as getting to Broad Ripple, especially from downtown... well forget about that.  Heading north on College Avenue toward Broad Ripple at the end of the day, traffic is backed up literally for as much as a mile. 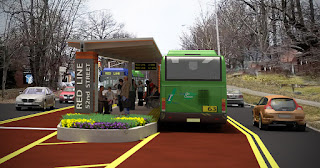 In implementing  the Red Line, several travel lanes are now dedicated to those buses and verboten for drivers to drive in.  The city has already lost a lot of travel lanes due to the addition of bike lanes before the city's leaders decided to take away more travel lanes.

College Avenue, one of the main thoroughfares by which people head to and from the Broad Ripple area, is one of the streets greatly impacted by the Red Line.  With the new bus system removing two of the lanes, there are only two lanes remaining for the north/south traffic on the road.  Needless to say, College Avenue backs up with an endless parade of cars during rush hour.   The obvious location for the Red Line heading to/from the Broad Ripple area was Keystone Avenue instead of the much more narrow, and residential, College Avenue.  But more money was to be made for developers on College Avenue so that is of course where the bus lanes were located. In Indianapolis, the interest of the city's taxpayers always take a back seat to developers whose ambitions are often funded by those same taxpayers.  And, of course, those developers are all too willing to kick back taxpayer money to the politicians in the form of campaign donations that keep the cycle going.

Part of the allure of the Red Line is that the all electric buses will have zero emissions and, thus, be better for the environment.  (Let's ignore for now the obvious counterpoint that emissions are involved in creating the electricity to run the buses.)  How exactly is the environment made better by greatly increasing the amount of time Indianapolis commuters are stuck in idling cars that are pumping out carbon monoxide as they wait through endless cycles of traffic lights?

The developers of the Red Line argue that, if our bus system is much better, Indianapolis commuters will park their cars and ride the bus instead.  That strategy is called "build it and they will come" approach and it never works.  Mass transit has to be designed to meet demand, not to create it.

Problems with Indianapolis traffic, post Red Line, could have been a major issue for Indianapolis voters when they go to the polls in November.  Yet, Republican mayoral candidate State Senator Jim Merritt, desperate for traction in the increasingly Democratic city, can't bring himself to raise the issue.  Merritt has spent more time talking about food deserts than the city's worsening traffic.  The result is Mayor Joe Hogsett does not have to defend the bus line to Indianapolis voters frustrated that their commutes are now considerably longer.

When it comes to whether taxpayers should subsidize economic development and, in doing so, making the corporate interests wealthier, the leadership of both political parties always line up to stick it to the taxpayers.  Make no mistake about it, the Red Line is all about corporate welfare.  The losers are Indianapolis taxpayers and commuters who drive in the city.
Posted by Paul K. Ogden at 12:59 PM 21 comments:

A couple polls today give the Bernie Sanders presidential campaign some hope.

A Gravis poll of New Hampshire, puts the Vermont Senator in first place.  Sanders comes in at 21% in that poll, while former Vice President Joe Biden is six points behind at 15%.  Massachusetts Senator Elizabeth Warren is the only other candidate in double figures at 12%.

Then you have the Politico/Morning Consult poll.  While Biden is at 33% in that poll, Sanders is a solid second place at 20%, well ahead of Warren at 12%.  Again, no other candidates are in double figures.

Media types for months have been touting the "surging" Warren candidacy, a claim that is usually accompanied by a contention that Sanders' prospects are floundering.  In the real world, the polls don't show much of that going on at all.  They show only a modest few point gain for Warren during the past several months and Sanders losing little of his supporters to Warren or anyone else.

What I find most interesting is that, despite overwhelming positive media coverage, Warren doesn't appear to be gaining much.  Meanwhile, Sanders' supporters continue to feel the Bern.
Posted by Paul K. Ogden at 5:36 PM No comments: