The news the last few days has focused on President Trump's "Go Back" tweet and its aftermath.  To recap, Trump tweeted that four female Democratic members of Congress, Alexandria Ocasio-Cortez (AOC) of New York, Ilhan Omar of Minnesota, Ayanna Pressley of Massachusetts and Rashia Tlaib of Michigan, should go back to their country of origin if they are going to criticize American policies.  Three of the four women Trump targeted are natural born U.S. citizens.  The fourth, Omar, was a Somalian who became an American citizen via the naturalization process, i.e. the legal way which 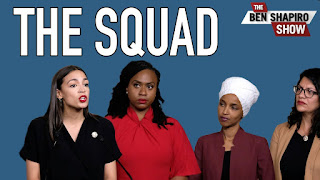 Since the initial tweet, , Trump has doubled down on his attack, attempting to recast his comment more about "The Squad's" supposed lack of patriotism rather than the young women's ethnicity/race.  All four of the women, as AOC often remind us, are "women of color."

Historically, the"go back" slur was employed by white supremacists to demonize African-Americans who fought the status quo of segregation.  So, naturally,  the mainstream media immediately discussed ad nauseam whether Trump's tweet was evidence of his being a racist.  A secondary media focus has been whether the Trump attack is part of a clever campaign strategy by the President as he pushes toward re-election in 2020.

Let me address both of those points.  Of course, Trump, is a racist.  Anyone who has studied Trump's long history in New York, beginning in the 1970s when Trump and his father would redline New York apartment complexes to prevent blacks from moving in, knows the disdain Trump holds for non-whites.  In Trump's defense, he is no doubt a bigger sexist than he is a racist.  Is that a defense?

I get the bigger chuckle out of the nonsense that Trump's "send them back" rhetoric is part of some grand re-election strategy.  Really?  When this started, members of "The Squad" (which may be the worst political nickname ever) were fighting with Speaker Nancy Pelosi who they accused of being against them as "women of color."  That was just a microcosm of a larger battle within the Democratic Party between those who want the party to move to the left and those who advocate a more moderate, and presumably, electable approach. Trump's rhetoric ended Democratic infighting and reunited the party.

But "Send Them Back" motivates Trump's base we are told and, thus, is great strategy!   But Trump's cultish followers are already fully motivated and, no doubt, will be turning out in droves in 2020.  Trump's rhetoric doesn't change that dynamic.  No, what Trump's comments did is motivate Democrats to turn out and drive suburban Republicans away from supporting the GOP.  Trump tried nativist, xenophobic attacks in 2018 and that worked out very badly for the GOP which experienced historic losses in that election.

The assumption for the "Send Them Back" attack, that our President is a patriot who is fighting for our country, is absurd.  As candidate and President, Trump has expressed open hostility to the notion of the rule of law, free speech, law enforcement, separation of powers and checks and balances, an independent judiciary, the independence of the Justice Department, a free press, etc. Trump routinely mocks the notion of America being a beacon of freedom around the world and has turned his back on defending human rights.  He has attacked American allies while giving aid and comfort to America's enemies, even the most ruthless dictators who routinely kill political opponents and journalists.  And let's not forget that Donald J. Trump openly courted and accepted the assistance of a hostile foreign power to win an American election, and has pledged to do so again.

The notion that Trump is a "patriot" is laughable.  Being older, I recall Jane Fonda attacking the United States during a visit to North Vietnam.  Like, "Hanoi Jane" Trump has displayed open hostility toward American values and institutions, far more than those four members of Congress he says need to leave the country.   Trump is not a patriot. Far from it.
Posted by Paul K. Ogden at 12:13 PM

A lot of you phony Christians are going to Burn In Hell.