Some brief thought on the passing of former Indianapolis Mayor and Senator Richard Lugar. 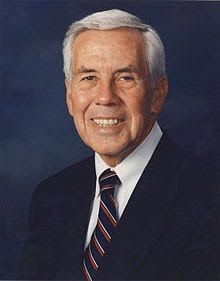 I was not a fan of Lugar.  I never thought he was much of a conservative.   In his last several years in office turned his back on the Indiana Republican Party.  He stopped going to state Republican dinners.  He wouldn't help out GOP candidates with their campaigns or to raise money for the party.  He, reportedly, even went so far as to have his staff send out threatening letters candidates who had their pictures taken with him and might consider using their photos in a campaign commercial.

Worse yet, I felt Lugar turned his back on Indiana.  On the rare occasions he came back to the Hoosier state he would have to stay in hotel rooms because he did not have a residence in the state.  For decades, Lugar voted using an Indianapolis address from which he had moved some 30 or so years earlier.  The dubious voter fraud charges against former Secretary of State Charlie White for supposedly voting somewhere he didn't live in ONE election pale in comparison for the decades of voter fraud charges that could have been filed against Senator Lugar and former Senator Bayh, who also votes using an Indiana address at which he clearly does not live.  Though to give Bayh some credit, unlike Lugar, he actually owns the Indiana property he falsely claims is his residence when he votes.

But I digress.  Lugar was a giant when it came to foreign policy.  He understood the important role of NATO in securing world peace post World War II.  Lugar had a keen grasp of the complexities involved in advancing the interests of the United States while simultaneously dealing with the competing interests of other countries.  Foreign policy is complicated and it takes a person with a high intellect and calm temperament to understand the issues and judge them without bias.  Lugar had that intellect and that temperament. The unfortunate turn in Lugar's career is not that he lost the primary to Richard Mourdock in 2012 (which loss he really brought that on himself for failing to do even the minimum to maintain his favored status in the GOP), but that he never became Secretary of State, a position for which he was so ideally suited.

In the Senate, Lugar was a fixture of collegiality and decency.  Lugar worked across the aisle to forge coalitions with like-minded Democrats to advance legislation.  Those were not always measures traditional conservatives wanted, but many were  Lugar did not view Democrats as the enemy but simply as people who were, usually, wrong about the issues and needed convincing.  In today's political world of unabashed tribalism, we could use more people who take Dick Lugars' approach toward politics.

I note with irony that Richard Lugar's partisan political career (he had been an IPS school board member) began in 1967 with an upset victory over Democrat Mayor John Barton in the Indianapolis Mayor's race.  That was the final Indianapolis Mayor's race conducted using the old city limits which only took in a tiny portion of the eight townships surrounding Center Township, the heart of Indianapolis.  During Lugar's first term, the Indiana General Assembly passed Uni-Gov, essentially  expanding the boundaries of the City of Indianapolis to the entire Marion County.  The addition of those Republican dominated Indianapolis suburbs into the city brought in decades of Republican dominance in Indianapolis Mayoral elections, which was not ended until 1999 with the victory of Democrat Bart Peterson.  Now as the 2019 mayoral election appears the horizon, Democrats are once again the dominant force in Indianapolis politics.

Great Article Paul! I wish I could have been as magnanimous as you towards Lugar. But we just couldn't bring ourselves to do it. Imagine Gary Welsh is tormenting him now!

The breaking point for me was when Lugar voted to approve Justice Kagan to SCOTUS claiming President Obama was “entitled to his choices for Supreme Court”. Hrumpf. Where was all this “entitled to choices” for Judge Robert Bork??