In 2015, Republicans won 12 of 25 Indianapolis City-County Council Districts utilizing a map drawn by Republican political operative David Brooks.  As I noted at the time, the problem was that Brooks had drawn the GOP districts with margins too small, margins that would not overcome the increasing trend of Marion County residents, particularly those living on the northside, voting Democrat.  The GOP did fairly well defending those northside districts in 2015.  It should be noted that District 2 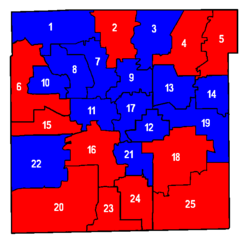 Republican councilor Christine Scales switched to the Democratic Party after the election.

Districts 2, 3, 4, 5, 6, 15 and 16 are northside council districts won by the GOP in 2015.  Mid-term elections are the most similiar to municipal elections in terms of turnout.  To establish a baseline, I looked at the Marion Recorder's Office election results in those districts in 2014 versus 2018.  Here is the table I put together of districts the GOP won in 2015.

The wild card in CC18 would be Beech Grove. It typically goes Dem but it has surprised observers and gone GOP in the past. Unless a repeat of 2007 occurs and the Dems stay home in large numbers because of unhappiness with Mayor Joe (such as the case with Mayor Bart) then you’re looking at almost irrelevance in the form of a 21-4 Dem domination of the Council. What happened in Geist that was a very reliable area for the GOP.

I suppose there could be some sort of Bernie-AOC thing hit the local Dems and their communist brethren leading to a total GOP washout but I don’t see that happening this time around.

David Brooks, for what it’s worth, is the very definition of RINO. His other home precinct in Hamilton Co is a 50-50 Democrat precinct now. Dems. In HamCo. Who’d thunk it?

I'm going to take a look at the Beech Grove area council district currently held by Mascari. I agree the local politics in that part of the county can affect things like the council election. I'd be surprised though if the GOP has a shot at a pickup there given the overall downward trend lines for the GOP in the county. I think the Jared Evans seat is out of reach for the same reason.

I am dying to look at the Hamilton County 2018 precinct results. You are right about the Democratic trend in Hamilton County. The Dems may only be 10 years away from winning seats in the county. Possibly less if the current trends continue.

I can't find the Hamilton County 2018 general election results on their web site unfortunately. Even if they have those, not sure I can get a precinct by precinct breakdown.

2018 Hamilton County results are on this page: https://www.hamiltoncounty.in.gov/222/Current-Election-Information

It’s not laid out in the nicest of formats but you can get the data you’re looking for there. The Brooks’ home precinct is either Clay Northwest 1 or Clay Northwest 2. You can see on a couple down ballot races the Dems won in those prec8ncts. The Dems did sneak in a township board win out in Fall Creek township. How ever you can see where in years past countywide was 70-30 or more for the GOP in Hamilton, 2018 was only a 60-40 countywide, with blue precincts in places you would never expect.