After writing about the California primary election results being favorable for the Democrats, I ran across an article written Dan Palmer of The Hill who wrote an article titled "There is No 'Blue Wave' in California."  In the article, Palmer aggregates the partisan vote in the California jungle primary and then concludes that, since Republican candidates received more vote than the Democratic candidts in virtually every key district the Democrats have targeted, the GOP will win those districts in the fall.

The article includes a description of Palmer's background:


Dan Palmer is a Republican donor and conservative political strategist. He served as executive director of United We Stand, planned the potential transition of Sen. Ted Cruz (R-Texas), and supported the campaigns of Rep. Kevin McCarthy (R-Calif) and President Trump.

Given Palmer's background, I am certain he is well aware of the absurdity of his political analysis.  No 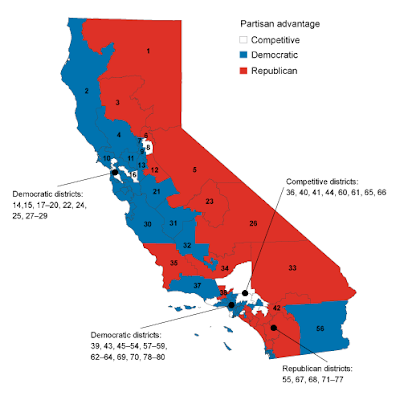 doubt he is simply doing what so many conservative commentators are doing these days, telling their audience what they want to hear rather than the far more painful truth. (For another recent example, take Newt Gingrich's piece "The Red Wave is Growing.")

That is a phenomenon I personally experienced while running for the House in 2000.  I won the primary for the northwest Indianapolis district.  My Republican opponent and I combined had the primary vote than did the Democrat.  But on the day of the general election, I did not beat my opponent 2-1, but rather only received, rounded off, 40% of the vote.  What happened?  Different electorate.  Voters did not like George W. Bush in that district, and they turned out in droves to vote against him.  My candidacy experienced the collateral damage of increased Democratic-leaning turnout spurred by a race at the top of the ticket.

Again, no doubt Palmer is well aware of the silliness of extrapolating primary vote to predict general election results.  But the primary election results can be used to measure partisan trends in those California Congressional districts.  In employing the apples to apples, oranges to oranges principle of political analysis, I have compared the aggregate partisan primary turnout in 2014 compared to 2018 in the key California districts at play this fall.  Below is what I found.


These tables show that while both parties experienced much higher primary vote in 2018 than 2014, the Democrat primary vote share increased in every district, some districts significantly.  That is consistent with the markedly increased Democratic turnout that has has been seen in virtually every special election race since the 2016 presidential election.   Primary results do not mean the Republicans will lose those districts, however.  Again, the general election electorate is much different than the much smaller turnout that happens in a primary.
Posted by Paul K. Ogden at 1:01 PM