A Republican mailing recently set off one of my pet peeves.  On an oversized post card, Brian Durham, a candidate for Marion County Sheriff. claimed that he had been "endorsed by the Marion County Republican Party." 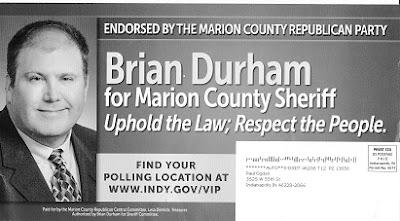 For the record, Brian, the Marion County Republican Party consists of those voters who show up at today's primary and select a GOP ballot.
Posted by Paul K. Ogden at 10:35 AM