Democrats appear to be doing dramatically better not only in suburban areas, but also in rural GOP
strongholds. 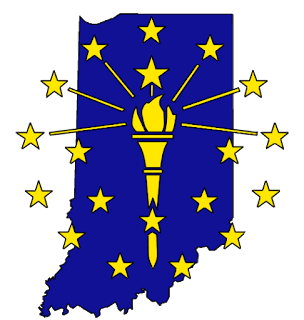 But a good political analyst doesn't focus so much on wins and losses, but margin.  Size does matter in politics, at least in predicting future elections  While it is hard to get the data, a recent report indicates
that, since Trump's election, state legislative seats are, on average, swinging 27 points in favor of Democrats.  That means GOP candidates are doing on average 13.5% worse, while Democrats are doing 13.5% better.

If those trends continue, how could they affect the Indiana General Assembly?  Right now the Republicans dominate both chambers, 70-30 in the House and 40-10 in the Senate. Indiana is about a 57-43 GOP state, so those numbers far exceed what one might expect if the maps were not so gerrymandering.  But even gerrymandering has its limits, particularly when faced with what appears to be a wave election coming in 2018.

My analysis might understate things as I only looked at those districts in which the incumbent had a major party challenger the last race.  What we've found in the recent anti-Trump/anti-GOP trend is that Democrats are running candidates and winning in districts so heavily Republican that the Democratic Party did not even bother to field a candidate in the last election.  So there could be more districts out there that the Democrats could win...assuming the party can find strong candidates.

But what about the 40-10 Senate?  Twenty-five seats are up in 2018, and by my count 22 of those are held by Republicans.  Again, looking at the GOP incumbents who faced challengers last time, there are a lot of opportunities for Democratic gains.  Scores of Senate Republicans up in 2018 are in relatively tight districts.  With just over a 21 point swing, Democrats win 7 seats.  In a 28 swing environment,  Democrats win 10 seats held by Republicans.

While there are numerous Republican seats up this time that Democrats could win, to get to even the Democrats would have to run candidates and win several previously uncontested state senate districts.  Given the numbers and that only half the Senate is up every two years, it would be virtually impossible for the Democrats to win Senate control in one election.

On Election Night 2016, I said that a President Donald Trump will prove to be the greatest thing that ever happened to the Democratic Party.  With virtually every election since, my prediction is getting closer to becoming reality.
Posted by Paul K. Ogden at 10:36 AM

Indiana never went heavy for the Republicans as they went AGAINST the flee baggers who were too stupid to mask their puppet strings and thus were caught out. Aside from the registration numbers Indiana leans conservative 60 to 40 which includes BOTH political parties. So, the idea that dumb s liberals are wholly a D problem is in error. All the d's need to do is ACT CONSERVATIVE, TALK CONSERVATIVE, and every once in awhile use common sense. However, their main weakness is this, ".....assuming the party can find strong candidates." Well, they can't so long as they don't care about winning elections and are comfortable with their little bought and paid for minority minions. It would help them to just cut the anchor rope and let all the dead head liberals sink back into the muck so as to free the boat to go somewhere useful. Running liberals is like taking a walk with a boat anchor tied to each leg.

At this rate we may lose the U.S. Senate as well Paul

Abdul says he is now licensed to practice law in Indiana. Maybe in another couple decades he can get around to registering his car in Indiana!

Barrister? Not even remotely having that talent. However, if Adam is going to abandon Facebook then Paul will really go off the cliff with his never trump stuff. Any stick in a storm...may have to suggest places where Paul can find some more polls or stupidities like....http://www.powerlineblog.com/archives/2018/02/fools-knaves-and-the-knavs.php I am amused at the anon comment about the scofflaw's license plates....seems like Gary Welsh pointed that out a long time ago.

Leon, it speaks volumes that you actually think that Donald Trump, a lifelong liberal Democrat, is a "conservative."