The President "shall take Care that the Laws be faithfully executed..."

Article I, Section 3 of the United States Constitution

Well, maybe not so much...  Fox News reports:


WASHINGTON –  The Trump administration has decided not to punish anybody for now under new sanctions retaliating for Russia's election-meddling, the State Department said Monday, in a surprising move that fueled further questions about whether President Donald Trump is too soft on Moscow. 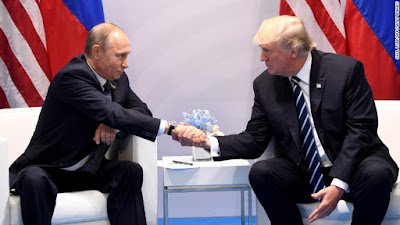 The government had until Monday to take two steps under a law passed by Congress last year in the wake of the 2016 presidential campaign. The first required the U.S. to slap sanctions on anyone doing "significant" business with people linked to Russia's defense and intelligence agencies, using a blacklist the U.S. released in October. The second required the administration to publish a list of Russian "political figures and oligarchs" who have grown rich under President Vladimir Putin.

On the first item, the administration decided it didn't need to penalize anyone, even though several countries have had multibillion-dollar arms deals with Russia in the works. State Department officials said the threat of sanctions had been deterrent enough, and that "sanctions on specific entities or individuals will not need to be imposed."

"We estimate that foreign governments have abandoned planned or announced purchases of several billion dollars in Russian defense acquisitions," said State Department spokeswoman Heather Nauert. She did not provide evidence or cite any examples.

Politico clarifies that, under the law, sanctions were to go into place "unless Congress is notified that prospective targets are 'substantially reducing' that business."  Yet, the Trump administration offers no evidence or examples of prospective targets reducing business...just a blank, vague assertion instead  And yet Congress is going to let the Trump administration is going to let the Trump administration off the hook for implementing a law which passed Congress almost unanimously?
These sanctions were passed by Congress to punish Russia for interfering in the 2016 election.  President Trump at the time complained loudly about the law but signed the bill anyway because he knew his veto would be overridden.  Undoubtedly the calculation was made that the best option was for the President to simply ignore constitutional duty to make sure the law is "faithfully executed."
I thought we just got rid of an Imperial President who believed he could make policy without interference from the legislative branch.  Unfortunately, we ended up with worse. President Trump, far more than President Obama, believes he is a man above the law.  Unfortunately, several Republican members of the House of Representatives are working overtime desperately trying  to subvert justice so there are no consequences for the President Trump or his buddy, Vladimir Putin, for what happened during the 2016 presidential election.
Posted by Paul K. Ogden at 10:04 AM