With Plea to Fire NFL Players, Trump and (Some) Conservatives Join Liberals in Attacking Free Speech

One of the most revolting political developments of the past decade or so is the effort by liberals to silence the speech of conservatives.  Many times these efforts involve liberal students exerting tremendous pressure on  college administrators to dis-invite right-wing speakers or, failing that, shouting down those speakers so their conservative views cannot be publicly aired.  This assault by liberals on conservative speech was documented in the excellent book "The Silencing:  How the Left is Killing Free Speech" written by Kirsten Parker, a Democrat who worked in the Clinton administration.

I have also written on the subject:


The point Parker made so eloquently in her book is that the American tradition of free speech should protect all speech, including those views set forth by conservative speakers, and that liberals need to condemn attempts to silence views on the right.  After all, some day it might be conservatives who are trying to silence the speech of liberals. 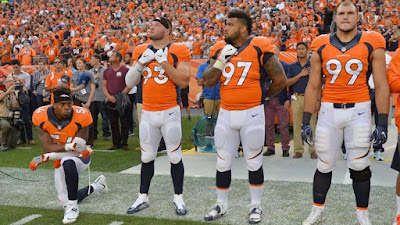 That day came on Friday.

At a rally for Alabama Senator Luther Strange facing a special election for the seat formerly held by Attorney General Jeff Sessions, President Donald Trump condemned NFL players who refused to stand for the national anthem and said that the owners should fire them.   He reiterated that view in subsequent tweets.

I find the players actions at best misguided and at worst deplorable. The protest is supposed to be about raising the issue of racism.  But the protest does not do that at all.  Instead the protesting players are slapping the face of all those who have fought and died so that we can have the freedoms we Americans enjoy, including the freedom those players have to earn millions of dollars playing a game one day a week.  Those players might have as well gone up and spit on the flag and what it represents.

But it is exactly because of what that flag stands for that we should respect and allow the protests to continue.  The flag stands for the freedom to express one's views, especially those that are political, i.e are about a matter of public concern.

Now I am well aware that the Free Speech Clause does not apply to private businesses, such as the NFL.  And, yes, the team owners can almost certainly legally fire the players for their objectionable speech.  But just because the action would be legal, does not mean it is right.  Free speech is not just part of a constitutional amendment.  It is an essential characteristic of American society and a bedrock principle of our political system.  If people are constantly threatened with their jobs if they dare express their views publicly then robust political debate is silenced and we all suffer as a result.

Sadly, we have a President who has long declared open hostility to the American tradition of free speech.   Candidate Trump attacked American free speech during the campaign., even suggesting that the requirement of "actual malice" for libel actions be done away with.  Trump warmly praised dictators who violently put down public protests and kill journalists who write negative stories about those dictators. He is the first President since John Adams who has argued that Americans actually have too much free speech.   Even before entering the world of politics, Trump was well-known for suing (or threatening to sue) anyone who had the temerity to speak ill of him publicly.

Unfortunately, too many of my Republican friends have tossed aside their conservative principles to back the President's over-the-top assertion that these NFL players should be fired by their employers. In doing so, they are eschewing Constitutional principles and embracing the liberal tactics of suppressing unpopular free speech, i.e. speech liberals do not like  If those tactics are wrong for liberals, they are also wrong when done by conservatives.

The answer to unpopular speech is not to silence that speech, but to counter it with other speech.  By all means let's roundly condemn those players who insult the grand principles for which our great country stands. But, as one of those principles is the right to speak out on matters of public concern, let's stop short of demanding that speech be silenced by firing the speakers.   For conservatives to do otherwise makes them no better than the liberals.
Posted by Paul K. Ogden at 12:44 AM

Fine, have the free speech but as a viewer or ticket buyer I do not want to be held hostage to the free speech. If I want to attend the rantings from either side I can participate in it as a private citizen. I do not go to my job and proceed to hammer my views on my buyers or fellow citizens.(Instead of pregame analysis we were treated to opinionated speech unrelated to football)(I turned it off and did not watch the game) All these people that make their salaries from the ordinary working people are ingrates and to disrespect the country and flag that gives them the freedom to speak is an insult. I am sorry to say but they are useful idiots falling to the inciters who are bent on destroying of the institutions and beliefs of America in favor of what?? Ask Venezuela, or North Korea. Just what are they complaining about? People that work hard and take advantage of an education are not oppressed or discriminated against. All people of any race have rank pulled on them. That's life. It is the agenda dictated from the subversives of this country. Next will be the removal of the national anthem from public gatherings. Then there will be another next.
By the way there are extremes taken in the guise of free speech which on watching all of this is to demand from us to give in to their distorted version of America for gain in some form or another.
The only ones oppressed nowadays are any dissenters to the left. Give in or else. Don't want to bake a cake they will destroy you and since that worked they are on to bigger things. Do the dissenting on your own time.
Now go ahead and yell.

Consider NASCAR, where owners announced they're not tolerating this crap. Here's a link to their schedule: http://www.raceawayhospitality.com/Race-Schedule/

Except for one former Ranger; Pittsburgh just became the Kneelers & Indy's on field stunt may see them renamed; something like the Cults...

I want to thank all the low information voters that elected the racist man child as POTUS. I hope you all burn in Hell.

The anthem protesters do not slap the face of all us that fought for that right.

When Trump states in a speech that the NFL or an NFL owner should fire a player, or when Trump's Press Secretary states that ESPN should fire one of its commentators, they may be committing a felony under 18 U.S.C. 227, (avaiable at https://www.law.cornell.edu/uscode/text/18/227), which imposes up to a 15-year prison term for trying to influence the employment decisions of a private entity. This crime appears to have been created in response to the blacklisting that was prevalent in the time of Sen. Joe McCarthy and the hearings of the House Un-American Activities committee.

I am a combat infantry veteran - Vietnam 1970/71 (draftee type. I am not bothered at all by some players taking a knee during the National Anthem. I understand it. When I came home from Vietnam after 13 months, I was angry. Angry that my country had sent me across the Pacific Ocean to kill people. Our politicians hid behind a plethora of lies: such as stopping communism. Unlike WW 2, when our entire country was mobilized for the war effort (think civilian rationing)we had no sacrifice on the home front during Vietnam.

We have now been at war in Afghanistan since 2001. The most dubious reasons were given concerning Bush the Youngers invasion of Iraq. To use a football analogy the politicians try this mis-direction play of using the National Anthem as litmus test for Patriotism. Patriotism does not mean blind obedience.

A quote from Carl Schurz (Union General) "My country right or wrong; when right, to keep her right; when wrong, to put her right".

By the way - Donald Trump’s Draft Deferments: Four for College, One for Bad Feet. I guess when the Trumpet had his chance to enlist or be drafted during the Vietnam War he took a knee. The Trumpet is the classic Chicken Hawk, that is his bravery increases the further remote he is from the battlefield in terms of time and space.

People (of color) that protest peacefully are sons of bitches, but marching neo nazis are good people? Trump is disgusting and so are his supporters, especially ones claiming to be Christians.

Jesus was a liberal.