Years ago the United States Supreme Court rules (quite correctly) that the burning of the American flag was an expression of a political idea  protected by the First Amendment's Free Speech Clause. Yesterday President-Elect Trump threw water on that decision, declaring that anyone who burns the American flag should be imprisoned for up to one year.  CNN reports:


(CNN)President-elect Donald Trump proposed on Tuesday a penalty -- including possible jail time or loss of citizenship -- for burning the American flag, in spite of two US Supreme Court rulings that protect the act under the First Amendment as a form of free speech. "Nobody should be allowed to burn the American flag -- if they do, there must be 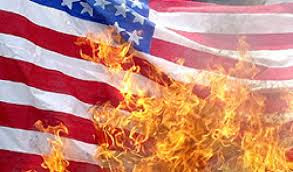 consequences -- perhaps loss of citizenship or year in jail!"

The Supreme Court has twice affirmed the right to desecrate the American flag as a form of free speech -- a historically contentious issue -- in cases before the high court in 1989 and 1990. In the 1989 case "Texas v. Johnson," the Supreme Court ruled 5-4 that flag burning was a form of "symbolic speech" protected by the First Amendment. The ruling came after an appeal from Gregory Johnson, who had been convicted by a Texas court of violating a state law that prohibited the "desecration of a venerated object" such as the US flag. The following year, in "United states v. Eichman," the top court again affirmed the right to burn the flag when it ruled 5-4 that the Flag Protection Act of 1989 -- passed by Congress in response to the Johnson decision -- was unconstitutional.

It's not immediately clear what prompted Trump's tweet Tuesday morning, though the national discussion of respect for the flag has been restarted in part following a flag burning November 10 on the campus of Hampshire College in Amherst, Massachusetts, as part of a post-election protest. The university then decided to stop flying the American flag at the campus, which also infuriated some members of the community.

Steve Vladeck, CNN legal analyst and professor at the University of Texas Law School, said Trump's suggestion that citizens possibly be expatriated as a penalty is also a non-starter. "In addition to ignoring the Supreme Court's clear teaching that flag burning is constitutionally protected speech, Mr. Trump's tweet also casually suggests that citizens should lose their citizenship as a 'penalty' for such acts," Vladeck said. "Even if flag burning wasn't protected, it would still be unconstitutional to deprive someone of their citizenship without some voluntary act on their part to renounce their allegiance to the United States or pledge fealty to a foreign sovereign."

Trump's opposition to the protection of flag burning puts him at odds with conservative leaders like Senate Majority Leader Mitch McConnell and deceased Supreme Court Justice Antonin Scalia, whom Trump has praised as a "brilliant Supreme Court Justice, one of the best of all time."

Trump is actually proposing a very dangerous idea...that speech should be disallowed because of the objectionable views contained in that speech. That is an idea that is anathema to Free Speech and suggests a President-Elect who harbors authoritarian impulses.  This comments follows a declaration by Trump during the campaign that libel protection should be changed so critics of public figures can be more easily hauled into court.  That suggestion would have a devastating effect on Americans' free speech rights.
Posted by Paul K. Ogden at 4:30 PM

Indiana Code 35-45-1-4 (a) A person who knowingly or intentionally mutilates, defaces, burns, or tramples any United States flag, standard, or ensign commits flag desecration, a Class A misdemeanor. (b) This section does not apply to a person who disposes of a flag in accordance with 4 U.S.C. 8(k).

Correct me if I'm wrong, but it appears under our civil asset forfeiture statutes of Indiana Code 34-24-1-1, if you used your car to transport a flag burned in violation of IC 35-45-1-4 or if the burning was committed on your front lawn, prosecutors could legally attempt to forfeit your car and/or your home since the properties were used to "facilitate any violation of a criminal statute".

http://thefederalist.com/2016/11/30/7-whoppers-inside-politicos-hit-piece-hhs-nominee-tom-price/?utm_source=The+Federalist+List&utm_campaign=67d07092e7-RSS_The_Federalist_Daily_Updates_w_Transom&utm_medium=email&utm_term=0_cfcb868ceb-67d07092e7-83837897 Of course, this site is probably paid for fake news.

Pete, since when are we on the right supposed to celebrate corporate welfare? That's how Trump did it - by promising taxpayer money to a big multi-national corporation. I thought Trump was supposed to be for the "little guy" against the big corporation? Apparently he wants the little guy to fund the big corporations. Not surprising that Trump's statements on the campaign trail meant absolutely nothing.

The statute you cite would be unenforceable because flag burning has already been declared constitutional. Unconstitutional statutes technically remain until repealed and very often they aren't. They are just remain in the code never enforced due to their unconstitutionality. Since civil forfeiture has to be based on behavior that is criminal, any forfeiture action filed on flag burning should be summarily dismissed.

Pete, since when are we on the right supposed to celebrate corporate welfare? That's how Trump did it - by promising taxpayer money to a big multi-national corporation. I thought Trump was supposed to be for the "little guy" against the big corporation? Apparently he wants the little guy to fund the big corporations. Not surprising that Trump's statements on the campaign trail meant absolutely nothing.
Seven million over ten years(700k a year) to save 800 workers payroll of $478,400,000 over ten years?
Explain the problem .