Speaking at a Democratic rally in Flint, Michigan, the former president ripped into the Affordable Care Act (ACA) for flooding the health care insurance market and causing premiums to rise for middle-class Americans who do not qualify for subsidies. 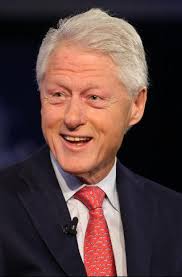 care and then the people who are out there busting it, sometimes 60 hours a week, wind up with their premiums doubled and their coverage cut in half. It's the craziest thing in the world," Clinton said.

"But there is a group of people -- mostly small business owners and employees -- who make just a little too much money to qualify for Medicaid expansion or for the tax incentives who can't get affordable health insurance premiums in a lot of places. And the reason is they're not in big pools," Clinton said.

"So they have no bargaining power."

Yesterday, Clinton tried to temper his criticism with comments yesterday focusing on what he said were the good parts of the law.

Donald Trump immediately seized on the former President's comments. The trouble, once again, is that Trump is the wrong messenger.  While Trump touts on the stump he wants to "repeal and replace" the ACA, aka Obamacare, the fact is Trump is on record saying he favors a program (universal health care paid for by "the government") that would be an expansion of the ACA.

Clinton tempered his criticism of the ACA yesterday, pointing to what he believes are the positive aspect of the laws.  Nonetheless, kudos to President Bill Clinton for having the guts to point out the failures of the ACA.  Clinton appears to understand that rising premiums and cuts in coverage are a result of forcing people to get coverage in an environment in which insurance companies do not have to compete for customers.

What's he saying about Carson's divorce?