The Indianapolis Star reports on yet another possible local tax increase for Indy residents, this time for expanded bus service:


Transportation advocates will stress improvements to the entire city bus system rather than development of controversial bus rapid transit lines as they promote a voter referendum to raise taxes for mass transit. 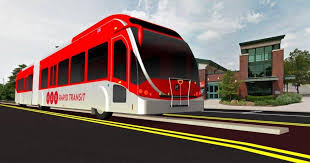 The vast majority of the $56 million generated by the tax would fix traditional problems vexing basic bus service, such as long waits, short hours of operation and unreliability, rather than running the Red Line rapid transit route, said officials with IndyGo and the Indy Chamber, which will push for passage of the referendum on the November election ballot.

By 2021, buses on a dozen lines would run every 15 minutes daily, compared with two lines on weekdays now; service hours would increase 70 percent; and the number of routes that run every hour would be reduced. The buses would operate 20 hours a day, starting earlier and ending later, said Bryan Luellen, a spokesman for IndyGo.

Marion County voters will be asked to raise personal income taxes by 0.25 percent to improve bus service. The increase would cost a worker making $50,000 annually $130 a year and supplement IndyGo's budget, which was $69.8 million this year.

The added revenue also would be used to operate the Red Line — the all-electric route with dedicated lanes stretching from Broad Ripple to the University of Indianapolis — and would fund sidewalk construction and shelters at bus stops.

This tax increase comes following the eight years of a Republican Mayor, Greg Ballard, who, by my count, attempted to raise taxes and fees (often successfully) more than 40 times.  Here is a partial list I put together seven years into Ballard's tenure.

Reporter John Tuohy's article goes on to discuss the opposition to the "$96 million Red Line, to be built with a $75 million federal grant and $21 million in local funds, [which] would be the linchpin of the reinvigorated bus system"  The biggest obstacle to Red Line centers on Broad Ripple, an area I travel to frequently.  The traffic congestion traveling to and through Broad Ripple is positively horrible now.  Broad Ripple opponents fear the Red Line would change intersections to make the traffic situation even worse and would also encourage "transit-oriented development" which would increase congestion in the Village even more.
Posted by Paul K. Ogden at 1:42 PM

Red Line is about developers qualifying for federal grants, including "transit oriented development" (TOD) grants, TIF handouts and other grants, not about improving public transportation. The initial north-south route chosen was Keystone Avenue, a logical choice, since it connects with I-465 on the north and the south sides and goes directly to the University of Indianapolis. However, the route was switched to College Avenue because of the availability of lots for development in the desirable Meridian-Kessler area--i.e., at Kessler, 49-50th and 46th Street, which are more desirable than land along Keystone.

This is proven by the fact that a member of the City-County Council asked a representative of the MPO why narrow College Avenue will be torn up and an entire lane of traffic will be lost just to put a median down the middle that a bus will have to straddle, instead of just improving the bus shelters along the curbside. His response: to protect the investment of future developers, so they will qualify for TOD grants to construct tall apartment buildings paid for by you and me. If IndyGo put in curbside pickup, and Red Line ridership numbers didn't happen (which they won't), then the City would have the flexibility to divert the buses to other areas of the City where there is greater need. The developers want College Avenue torn up and shelters put in the middle of the street as insurance for their federal TOD grants. It's as simple as that.

Keystone Avenue has multiple big-box stores, grocery stores, pharmacies, Glendale Town Shops, Keystone at the Crossing, it is 7 lanes wide, already has a median, and could easily accommodate curbside bus shelters without disrupting traffic flow. It is the only logical north-south route for a bus rapid transportation system. It doesn't have the development appeal of Meridian-Kessler or Broad Ripple, however. This is just one more example of the City's misplaced priorities. Broad Ripple and Meridian-Kessler are not neighborhoods that depend on public transportation. There are plenty of other areas of the City that are dependent on public transportation. Public transportation could be vastly improved without Red Line.

All of this explains why the Indy Chamber has allocated as yet unreleased budget for a massive advertising campaign to push for passage of the referendum. You don't really think they care about people who need to ride the bus, do you?

2:23, you nailed it. This has nothing to do with improving mass transit for those who need it. Personnally I like the idea of improving the existing bus system and if we want to experiment with BRT, start with the lines running east west through neighborhoods that really need better transportation, redevelopment and investment, you know, what TIF dollars were originally intended to do. Not relatively well to do neighborhoods like Meridian Kessler and Broad Ripple.

Mr. Ogden, thank you for posting. A large part of the Indy Chamber's budget comes from city issued grants. It's been going on since the Ballard years, and it's no coincidence they supported every single Ballard tax increase and initiative as "pro business" much to the dissatisfaction of its members, what few are remaining. Their "leader" is a former Ballard staffer who has never worked a day in the private sector. They are a mouthpiece for the downtown insiders and nothing more. Now the Chamber has an undisclosed budget to sell BRT and yet another tax increase.


What do you want to bet your useless, overpaid, crony corporatist tools for the most part, Indianapolis City County Councilors will allow yet another boondoggle like this to slide on through? Good God, was it not enough they all allowed that grotesque law-breaker Ballard to turn downtown into "Disneyland for the Development Class"?

Why does Indianapolis even have a City County Council? Their impotent, for-show "representation" is a farce and the concept and the CC Council should be abolished.

The suburban counties more and more every day look to be better alternatives to a quality of life than just about anywhere in Marion County.

It wouldn't be so bad to pay extra taxes if everybody had a chance to ride the bus, but it is going to be in certain places. I'm so tired of Indianapolis always want extra money! I hope everyone votes this down!!!

I have lived on College for nearly 25 years. I drive down College to work and return home the same way. Traffic is always heavy and from 38th Street through Fall Creek is extremely slow and crowded every day. The red-line running through Broad Ripple and Meridian Kessler, eliminating hundreds of parking spaces and essentially having 1 lane going North and 1 lane going south is pure insanity. I won't be able to turn left into my driveway according to what I have seen. A lot of traffic is suddenly going to be pushed through neighborhoods like Broadway Terrace and Central Ave. No one involved on the PRO side of this project lives anywhere near these neighborhoods. Ask all of the people that live on college, especially from about 57th Street south where they are going to park. Lots of doubles and tough to find parking near their house. I can tell you that any of the developers that still think they are going to build high rises in Meridian Kessler will continue to have a huge fight on their hands. This is a Money Grabbing scheme being forced on tax payers thanks to our "Federal Govt" which needs to stay out of these kinds of programs that always end up in the hands of the wrong people to benefit the few at the expense of taxpayers who receive no benefits and in all likely hood will see a reduction in property value. There are a limited number of people who are attracted to living on college. I have seen many come and go. Now we add this ridiculous red line to the mix and the number of folks wanting to live on College is even smaller.
What I would really like to see published is who are these people promoting this project? I need to know who you are. I'll bet you are going to stay anonymous just like most of the comments posted here. It's not just Indy Go. VOTE NO in NOVEMBER

What is meant by expanded bus service is frequency and hours of operation. No new routes will be created while in fact some routes and stops will be dropped to achieve a Rapid Transit status.
Spending nearly $100 million on a 13.7 mile ride is just the start as a Federally unfunded Phase 2 and Phase 3 are already planned. In the past, IndyGo acquired Federal funds for these two routes and provided contracted bus service to Carmel and Plainfield. When these Federal funds were expended, service was deemed uneconomical and was abandoned.
The proposed Rapid Transit Blue Line and Purple Line will overlay existing direct routes while bypassing some time consuming current routes. No Federal funds have been approved for either project. Total expenditure of the envisioned Marion County BRT proposal is estimated to cost some one billion dollars when completed.
With new tax money tied up in IndyGo revenue bonds, the taxpayer will still be responsible for shortfalls in a system where fares cover only a small percentage of operating expenses. It appears that very little is to be gained for the system that we currently have and there are questions on how taxpayer money will be spent in the future.

"College Avenue Homeowner" sound pretty anonymous to me. I too and a College Ave. Homeowner who absolutely supports the Red Line and cannot wait to use it. I guess that makes me just one of the crazies. However, you do not speak for all of us. The "Stop the Redline" petition has 459 signatures to date. Last I looked the "pro Red Line" petition had over 1300. But you'll just wrongly assert that those are all people who stand to benefit from the "boondoggle" as you call it. You can't have it both ways. You're in the minority here and your "facts" are just wrong and are founded in these Cato Institute, Koch Bros. "anti-planner" "studies" which are so incestuous and filled with holes it's absurd.

The houses on College have alleys and garages that gave them. The Keystone corridor was never a "choice". It was looked into in an Alternatives Analysis and was deemed the wrong choice as College Ave. (and the rest of the Red Line) is the densest corridor in the State. Look that up if you need to. The point is that you do not speak for all of us when you say that "no one who live close to College is for this". That's just patently false. It will be built, density will follow, property values will rise, businesses will thrive and the sky won't fall.

The racist David Duke never imagined a fraudulently subsidized bus scam to separate the people of New Orleans- look for Indy to be separated along College Ave. The Red Lie scam is about separating people & the taxpayers from their hard earned money.