My expectations going into Super Tuesday was that Donald Trump would gain so much from a near sweep of GOP caucuses and primaries to give him the necessary momentum to put the nomination away on March 15th, the date when states are allowed to employ winner-take-all-delegates contests.  While I did expect Texas Senator Ted Cruz to win his home state, which he did, I expected Trump to handily win all the rest.  That didn't happen. 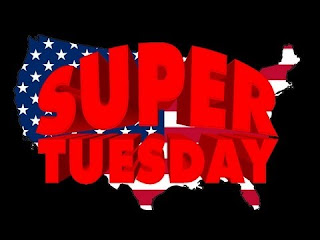 Rubio (25% and 21%) dividing the significant non-Trump vote in those states.

But behind the Super Sunday victories were clear signs that should give candidates not named Donald Trump hope.  Looking at the scoreboard, Trump didn't win 10 of the 11 states as expected.  He won 7 of 11.  Despite having double figure polling leads in Vermont and Virginia, Trump narrowly won those states by less than 3 points over Ohio Governor John Kasich and Rubio who finished second.  A few thousand votes in those states, could have flipped the results and leave the pundits pondering how Trump lost a majority of Super Tuesday states.

Trump also underperformed polling in several states.  Let's take a look at a few of them.

TEXAS:  According to the Real Clear Politics' average of polls, Cruz had a 9% lead in the Texas polling. Two Super Tuesday evening polls even showed Trump trailing Cruz by only 1% and 3%.  Cruz though ran away winning the Texas presidential primary by 17%, 43.8% to Trump's 26.8%

OKLAHOMA:  The RCP average of polls had Trump with a 11.4% lead over Rubio, his next closest rival.  All recent polls pointed to a Trump double digit victory.  Yet Cruz though won the state by 6.1%.  While Cruz outperformed his polling by 14% and Rubio by nearly 13% by 4.4%.

VIRGINIA:  The RCP average in the state had Trump with a 14.5% lead over the second closest candidate, Rubio.   But once again, Trump failed to match polling expectations, underperforming by 2.1% while Rubio overperformed his polling average by 9.6%.  As a result, Trump's 14.5% polling lead was reduced to a 2.8% victory

VERMONT:  Castleton University did the only reported poll in the race. That poll, conducted in early to mid February, showed Trump with a 15% lead over his next closest rival.  But while Trump nearly matched his 32% poll number with a 32.7% result, the poll didn't capture the rising Kasich support in the state.  Kasich went from 10% support in the poll to 30.4% on election night, cutting Trump's margin of victory to 2.4%.

There were exceptions, however.  In Massachusetts, Georgia and Alabama Trump outperformed (albeit slightly) polling expectations and delivered solid victories that nearly matched the RCP average.

TOTALS:   I expected that Trump's numbers would exceed 40% in many Super Tuesday states and may even top 50%.  This was based on the polling in those states and trend lines nationally, a perception that was underscored by the very recent CNN poll showing Trump at 49% support among Republicans.  But instead Trump's support only exceeded 40% in two states, Massachusetts (49%) and Alabama (43%).  An average of the results of the Super Tuesday states showed Trump won 2,941,437 of the 8,343,579 Republican votes, 35.3% of the votes.  So the working proposition that Trump has a 35% or so cap on Republican support may turn out to be the case.

DELEGATE COUNT:  As the pre-March 15 contests on the Republican side award delegates proportionally, Trump was not able to increase his lead by much.  Trump won 234 of the 555 delegates awarded on Super Tuesday, while Cruz received 209, Rubio 90, Kasich 19 and Carson 3.

LOOKING FORWARD:  The next big election day is March 15th when a number of states, including Ohio, Florida, Missouri, Illinois, and North Carolina.  Florida will be a key state for the Rubio campaign, but also for Cruz who would much rather see Rubio win than those delegates go to Trump.  Likewise, Rubio and Cruz would much rather see Ohio Governor Kasich win his home state than have it fall to Trump.  If Kasich wins Ohio and Rubio wins Florida, the odds increase dramatically that the Republicans will have the first national convention in decades with no candidate having a majority of the delegates.
Posted by Paul K. Ogden at 2:03 PM

Uh, Trump did not fail your straw man test (shades of the discredited 'think again'). It was never his intent to "knock out" anyone. Trump profits 1) from having many other candidates 2) keeping the Republican discussion of issues going 3) sucking all of the air out of the Democrats who have terrible choices. As for all of yesterday and yesteryear's polls are they not so much used toilet paper when it comes to real polls?

This thing isn't over & Cruz is still very much in the hunt.

Let me be the 1st to say this to Trump fans: if Trump enters Cleveland w/o a majority of delegates, do not bellyache about a nomination being "stolen" when he loses the 2nd, 3rd, etc. ballot. Simply put, the candidate with a plurality of delegates is NOT somehow the "most deserving" of the nomination. To be sure, the very fact that Trump has benefitted from a fractured field & media adoration yet STILL cannot close the deal militates AGAINST his claim to the nomination.

Oh, and -- yes -- I do believe that the Convention's Rules Committee should require disclosure of any candidate's tax returns before his/her name may be placed into nomination on the floor.