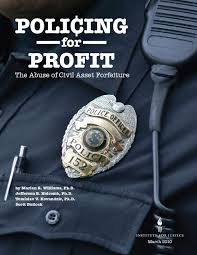 The Virginia-based Institute for Justice has filed suit challenging Indianapolis' use of civil forfeiture.  The Indianapolis Star reports:


For several months, Jack and Jeana Horner did not have their two vehicles, and they did not know why or where they had been taken.

Law enforcement officials seized the Horners' 2008 Jeep Grand Cherokee and 2003 Ford F150 in August 2013, after they suspected that Jeana Horner's son, who was borrowing the vehicles, used them to transport marijuana. Jack and Jeana Horner, who did not know about the drugs and did not face any criminal charges, spent more than nine months trying to get their vehicles back.

The Horners exemplify an ongoing problem with civil forfeiture in Marion County, said Sam Gedge, an attorney for a national nonprofit group that is now suing city and law enforcement officials in Indianapolis.

There are two basic problems with Indiana's civil forfeiture law.  First, the Indiana Constitution says that the Common School Fund (which provides low cost loans for schools) is to be made up of "all forfeitures."  Attorney General Greg Zoeller has issued an advisory opinion that "all" doesn't actually mean "all" and that civil, as opposed to criminal, forfeitures can be excepted by the legislature.  The opinion is rejected by virtually every legal expert who has looked at it, including, it would appear, all the justices of the Indiana Supreme Court.

But there is a second problem, namely in how its being applied.  Even if the legislature can carve out civil from all forfeiture, despite a constitutional provision that says they appears to say otherwise, the law still says that civil forfeiture proceeds can only be kept by insofar as they cover law enforcement costs of the particular action that led to the civil forfeiture. All excess funds, by statute, have to go to the Common School Fund.  As the Star notes (and I have noted numerous times previously), that is not happening:


The state law in question is interpreted differently by each county. Some meticulously account for the investigative costs and send the remaining dollars to the school fund. Many do not put money into the school fund. In Marion County, forfeited funds are divided between the law enforcement agency and the prosecutor's office, according to court records.

According to memorandums of agreement between the agencies, the prosecutor's office gets 30 percent of forfeited funds. The remaining 70 percent goes to IMPD or to the Metro Drug Task Force, a group of officers from Marion and neighboring counties, depending on which law enforcement body is involved in an investigation.

In other words, Marion County/Indianapolis officials take a collective approach to determining law enforcement costs.  But that is a direct contradiction to the statute saying court costs are determined on a case-by-case basis. As I noted previously on my blog, the statute defining "law enforcement costs" in a civil forfeiture action is IC 34-6-2-73:

In Serrano v. State, a civil forfeiture case not involving a legal challenge to the practice, the Indiana Supreme Court went out of its way to note the publicity over the abuse of civil forfeiture and to point out that IC 34-6-2-73 requires that law enforcement costs be calculated on a case-by-case basis.  From a footnote to that decision the Court said:


From the proceeds, the court may except law enforcement expenses incurred ―for the criminal investigation associated with the seizure and a prosecutor‘s expenses associated with the forfeiture proceeding and the expenses related to the criminal prosecution. Ind. Code § 34-6-2-73 (2008). Whether this limited diversion, calculating actual expenses on a case-by-case basis, is consonant with the constitutional command that ―all forfeitures‖ be deposited in the Common School Fund is an unresolved question.

Still, despite a law directly on point and a Supreme Court directive, county prosecutors across the state, including Marion County Prosecutor Terry Curry, continue to ignore the law and pocket 100% 100% of civil forfeiture proceeds as law enforcement costs.

Unfortunately since defendants are no longer considered a party to the case when the civil forfeiture proceeds are being divvied up between the agencies, there is no one to object when law enforcement walks away with 100% of the proceeds with nothing going to the Common School fund..  So it is very difficult to get judicial review of the practice.  Still judges are supposed to be demanding proof of law enforcement costs as to that particular action and insist that a check for the excess amount be cut to the Common School Fund.  Many judges, including those in Marion County which have for at least a decade allowed law enforcement to keep 100% of civil forfeiture proceeds, are simply not doing their jobs.

Unfortunately Marion County Prosecutor has greatly expanded his use of civil forfeiture, while continuing his predecessor's practice of pocketing 100% of the money in violation of Indiana law.  The numbers bear that out:


According to the complaint, Marion County law enforcement agencies received an average of $888,112 in forfeited funds annually from 2003 to 2010. That number reached about $1.5 million in 2011 (the first year Curry took office), the complaint says.

There is an irony that law enforcement officials, including Prosecutor Curry, are charged with the responsibility of enforcing the law against lawbreakers, yet they insist on blatantly violating the Indiana Constitution and statutes in order to pocket money taken from those same lawbreakers.

Tuesday, May 17, 2011, It's Time for State's Judges to Enforce Civil Forfeiture Law By Demanding a Case-By-Case Calculation of Law Enforcement Costs With Rest Going to Common School Fund

Occam's Razor suggests that these prosecutors are thieves and crooks.

How are these illegal seizures other than criminal conversion?

Why has this required the intervention of the Institute for Justice. Why has no Indiana lawyer filed suit?

I actually did a few years ago. Took the approach of treating it as a qui tam. The Court dismissed it but suggested the law was probably unconstitutional, Tried to amend the complaint to pursue that theory instead but the judge didn't allow it. I would have had to refile and I didn't have a plaintiff to do that.

It's not that easy. It's highly complex litigation that we attorneys would be spending hundreds of hours on without any compensation at all. (The qui tam approach would have at least provided fees.) It's really hard to find plaintiffs who have standing to challenge. I tried and tried to get a school district to be plaintiff and many said they were interested, but they didn't want to be first. I spent a lot of time trying to find someone. It's really hard to find a plaintiff because courts have already said the defendant in a forfeiture action doesn't have standing to dispute the division of money seized because they're no longer in the case when that's done. You can try taxpayer standing, but that's always very iffy. That's why I was trying to do a school

I'm tickled to death the Institute for Justice which is funded by donations is taking up this cause. I don't fault Indiana attorneys for not taking on very complex litigation pro bono.

Why is it that the Marion County Sheriff's Office is also using the funds from forfeiture? It was my understanding that they lost their "road patrol" function in the merger. So why do they have a office that also generates forfeiture funds, which of course are used to enter into leases for vehicles without CCC approval. But I digress.

Why not use your crowd funding technique to raise some money for this Institute and assist them with your particular knowledge of Indiana. So, you don't practice law but you sure would be a help to them. We ought to be able to find a school or two or ten once they know we are serious and are going to the mat against our embedded crooks, thieves, parasites and lawyers who help them with their unjust practices. You could donate your time too, or a part of it and be compensated for expertise. I'd help fund that.

http://www.southbendtribune.com/news/local/indianapolis-officials-face-lawsuit-over-civil-forfeiture/article_992243a8-5434-525d-8918-8752988c8606.html Does this mean that some Republicans follow the law and others do not? Same question of Democrats? Any political platform mention of these kinds of clear thefts?

Actually we were going to do exactly that type of thing. One thing we found out though is that in terms of raising funds for political stuff you have 1) the home run campaigns (think Memories Pizza) and 2) those where the contributors are friends and family of the person seeking funds.

In other words, unless it is a home run campaign, nobody but friends and family will contribute. Having a good political cause is not enough. You typically have to have a home run campaign driven by the media, usually talk radio telling people to contribute. (Dana Loesch did the Memories Pizza campaign We actually did have a campaign relating to civil forfeiture in Indiana. Nobody contributed.

Eventually we shut down the fundraising site. Our business model didn't work like we were sure it would.