While Vermont Senator Bernie Sanders has consistently polled ahead in New Hampshire, home of the country's first presidential primary, the expectation has always been that Hillary Clinton would go into that defeat having first won the Iowa caucus.  Now new polling out of Iowa suggests a Sanders' surge in that state may leave Clinton with an 0-2 record before heading off to the Nevada caucus and South Carolina primary held later in February. 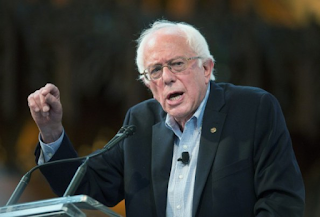 Recent polls not only are showing movement away from Clinton in favor of Sanders, but the polls also showing movement from Clinton toward Republican candidates in head-to-head matchups. Given there has been no major stumbles by the Clinton on the campaign trail of late, it is not clear what is driving people away from supporting Hillary Clinton

In a very much related development, the Clinton machine is now hitting Sanders disingenuously asserting Sanders does not support Obamacare.  Actually Sanders wants to go further than Obamacare, mandating single-payer (government) insurance coverage for everyone.
Posted by Paul K. Ogden at 10:38 PM

The internet is doing her in. The free market of information works. Duh media can no longer protect the crooks and their kneepads have been worn out in the process. Carly, by the way, seems best at pinning HC's balloons. Her straight talk about HC "accomplishments" resonate. An old bag lady in pantsuits (which are on fire for serial lying) can't keep up with a real talent. Trump's deft efforts to bring Bill back into the picture seem to work as well....does anyone ever want to see him chasing interns in the White House again?

@Anonymous Are you srsly that effing stupid? Why are so many of you right wing trolls so hopelessly ignorant, it's either genetic or you were dropped on your head too many times as a child

Hillary is desperate and the McMega-Media is also playing their part in the deception. CNN, and MSNBC are besides themselves at realizing Bernie is coming on strong. Chris Matthews was at MSNBC was especially upset at Joe Biden's positive comments on Bernie. He even came out and said Hillary should have promised Biden a position in her Administration, like SOS. I thought Matthews comments were stunning to suggest and admit in public that Hillary should have bought Biden's silence in effect by offering Biden the SOS position.

I had a laugh Chelsea was saddled up and sent out to gather in the Millennial Vote, as if Chelsea could possibly relate to anyone other than another wealthy millennial.

Dec 17, 2015: With 271,527 votes cast -- and all three presidential candidates campaigning directly for your vote -- the results are in and they are extraordinary. Bernie Sanders has earned Democracy for America's endorsement in the 2016 Democratic Party presidential primary with an astonishing, record-breaking 87.9% of the vote.

Democratic presidential candidate Bernie Sanders on Tuesday received the endorsement of MoveOn.org, a grassroots organization that has been at the forefront of liberal causes.

MoveOn says the Vermont senator was supported by 78.6 percent of its membership in an online vote of more than 340,000 members. Hillary Clinton received 14.6 percent and Martin O'Malley received 0.9 percent with the remaining members urging no endorsement.

Shrillary's a loser, whose career is what?