In his State of the State speech tonight, Governor Mike Pence did not take a position on adding LGBT protections to Indiana's civil rights laws.  But he expressed very strong support for religious freedom:

"I will not support any bill that diminishes the religious freedom of Hoosiers or that interferes with the Constitutional rights of our citizens to live out their beliefs in worship, service or work. ... And no 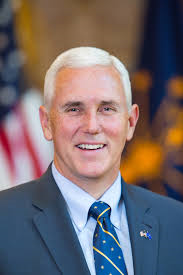 one should ever fear persecution because of their deeply-held religious beliefs."

The attorney in me noted a key point the Governor made, namely that Indiana's Constitution not only protects the freedom to worship and exercise one's religious faith, but also protects "freedom of conscience," a distinction that makes Indiana's constitutional provision regarding religious freedom more broad than that contained in the First Amendment.

Pence's words seem to suggest that legislation authored by Senator Travis Holdman,(R-Markle), a bill which appears to have the support of the Indiana Republican leadership in the General Assembly, does not sufficiently protect religious freedom.  As currently constituted the proposed law provides no protection for an individual's religious freedom or conscientious objections to such things as participating in a same sex wedding.

Freedom Indiana was none too happy with the Governor's speech:


"This is a complete letdown. In his speech tonight, after 10 months of allegedly listening to Hoosiers, Governor Pence chose to punt the critical issue of civil rights protections for gay and transgender people to Indiana lawmakers. We are disappointed in his lack of leadership on an update that we know a majority of people in our state support.

Governor Pence may have taken a major step toward his re-election tonight.  Contrary to the poor political advice he's been given in the past, Governor Pence appears to have reached the conclusion that standing up for religious freedom is smart politics. We will see if he lives up to those words as the legislative session continues.
Posted by Paul K. Ogden at 9:05 PM

Remember when Pence thought he could be President? Laughable.

First point Pence's State of the State speech was very short on details and makes him appear weak because he basically decided to punt on the RFRA issue and hopes the legislature comes up with something. Secondly it is all well and good for him to support religious freedom with words but words are meaningless. Lastly stop trying to redeem Pence. He is beyond help. His refusal to fire Daniels retreads and his promotion of Jim Atterholt as his Chief of Staff show he is useless.

While it's hard to tell how much is pro wrestling; the Governor did better than expected last night. Word around the statehouse is he's "open" to hearing ideas; problem is those meetings are brokered through staff filters / handlers, putting him at distance from grass root realities.

Should "Republicans" give thought to expansion of government & tax increases; other than no? Republicans have a brand problem precisely because they favor notions of brand over fundamentals of principle.

I love it, Christians are killing religion and the Republican Party. The country has changed, old people.