Following Tuesday night's election results out of Indianapolis we were swamped with stories about how voter turnout was the worst ever, or at least in recent history.  But was it?  No, it wasn't.

The 1995 Indianapolis Mayor's race featured Republican Steve Goldsmith running for re-election against Democrat Z. Mae Jimison.  Jimison was never a favorite of the Democratic establishment and the party made little effort to help her in the election.  (Very much like 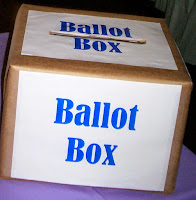 this year and the Republicans lack of assistance to their nominee, Chuck Brewer.)  The lack of effort was noted by the voters, when only 116,307 voters came to the polls.

It is because turnout is based on total registrations not the adult population in that area.  Registration numbers in recent years have become grossly inflated.  The reason is that, in 1993, the Democratic Congress passed the National Voter Registration Act.  The bill, dubbed "The Motor Voter Bill," not only allowed for easier registration, it eliminated automatic purges for non-voting.   While the law and its progeny allowed counties and states to clean up their voter registration rolls that became increasingly filled with dead voters and those who had moved, that process has proven to be cumbersome and expensive. Indiana is one of the worst states at keeping its voter registration rolls clean, and has been a target of litigation because of it.

Contrary to Democrats' claims there doesn't seem to be any turnout trend associated with Indiana photo ID requirement (passed in 2005 but not implemented until 2008) or other supposed restrictions on voting. The only thing apparent from the data is that registration has soared at the same time as official turnout (as opposed to real turnout) has decreased.  Someday the media might connect the two.

Here is a table on the data I collected.  I did not include all the population data I used in my calculations.  The census data though is readily available with a google search.

Anon 4:10, thanks for catching that. You are, of course, correct. I fixed it.


Great analysis. Interesting that a higher turnout results in a substantial resounding voter reaction to the deep stains corrupt Republican Greg Ballard spread upon his Party and virtually all of its candidates through the numerous illegal and no doubt unethical scam perpetrated upon the people... unstopped by the election we've recently been informed.