A new poll out shows that support for same sex marriage and other LGBT rights have declined since the Supreme Court ruling legalizing same sex marriage.  Huffington Post reports on a AP/GfK poll conducted after the decision:


According to the poll, 42 percent support same-sex marriage and 40 percent oppose it. The percentage saying they favor legal same-sex marriage in their state was down slightly from the 48 percent who said so in an April poll. In January, 44 percent were in favor. 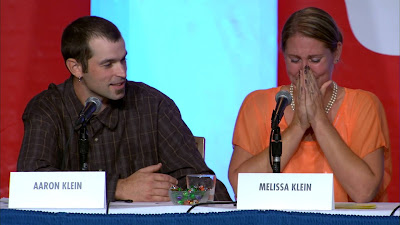 "What the Supreme Court did is jeopardize our religious freedoms," said Michael Boehm, 61, an industrial controls engineer from the Detroit area who describes himself as a conservative-leaning independent.

"You're going to see a conflict between civil law and people who want to live their lives according to their faiths," Boehm said.

Boehm was among 59 percent of the poll respondents who said wedding-related businesses with religious objections should be allowed to refuse service to gay and lesbian couples. That compares with 52 percent in April.

Also, 46 percent said businesses more generally should be allowed to refuse service to same-sex couples, while 51 percent said that should not be allowed.

The poll found pronounced differences in viewpoints depending on political affiliation.

By a 64-32 margin, most Democrats said it's more important to protect gay rights than religious liberties when the two are in conflict. Republicans said the opposite, by 82-17.

When the battle over the Religious Freedom Restoration Act erupted in Indiana this spring, I warned that there would eventually be a political pushback.  Not only would religious folks be better organized next time, there are a lot more of them out there voting on their issues than those supporting LGBT rights.  But I also knew that those supporting LGBT rights would eventually go too far and begin bullying and harassing people and businesses who did not share their views.  While that might win some short term political battles, that's not a prescription for long-term success.

A perfect example is LGBT rights organization Freedom Indiana's approach in 2014 compared to 2015.  In 2014, the organization put together a very positive outreach campaign in support of same sex marriage and against an amendment to Indiana's Constitution defining marriage as between a man and a woman. When the 2015 legislative session rolled around though Freedom Indiana's approach had changed dramatically.  The organization waited until the last days of the Indiana General Assembly to ambush religious rights supporters over RFRA, a bill that had been introduced months earlier.  In opposing the bill, Freedom Indiana scrapped its positive approach of a year earlier and engaged in a campaign of bullying and intimidation against those who dared support RFRA.   Freedom Indiana enlisted its corporate allies to make threats against legislators and the Governor if they dared support the legislation.  RFRA opponents engaged in a campaign of deceit and demagoguery with the disingenuous claim that the law was a "license to discriminate" against the LGBT community.   The media dutifully reported this mantra even though there was not one instance in the 30 other states that have RFRAs or at the national level in which a RFRA overturned the application of an anti-discrimination law.

While RFRAs are irrelevant to the application of anti-discrimination laws, states and communities that have those anti-discrimination laws that include sexual orientation are being used by LGBT extremists to bully and threaten Christian owners of businesses who don't share their views.  The most recent example of that is the Oregon bakery known as Sweet Cakes by Melissa.  The owners of that business, Aaron and Melissa Klein, were cited for violating Oregon's anti-discrimination law and hit with a judgment of $135,000 in emotional damages for a lesbian couple supposedly suffered when the Kleins told them that they had religious objections to same sex weddings and felt baking a cake for the ceremony would violate those beliefs.  Worse yet, the Oregon Labor Commissioner found that the Kleins, by speaking out publicly about their opposition to same sex marriage as well as talking about the case, violated Oregon's anti-discrimination advertising law.  The Commissioner, who is an attorney but apparently slept through Constitutional Law 101, also imposed a gag order on the Kleins.

The bottom line is that those who support LGBT rights need to be concerned that the most extreme members of their movement will turn the public sharply against their agenda.  To their credit, some in the LGBT community have argued that LGBT rights supporters should try to win converts through education and persuasion, instead employing threats and intimidation to those who don't share their view.  Those LGBT moderates have discussed the need to be tolerant of those folks who don't share their view because of religious or other objections and that LGBT community should not support driving small business owners into bankruptcy because the owners don't support same sex marriage.

Unfortunately for the LGBT community, those more reasonable folks are not driving the LGBT political bus.  The LGBT moderates better get control of the steering wheel soon because that bus is heading for a political cliff.
Posted by Paul K. Ogden at 12:28 PM

As a out gay male active in our community, I support every word of your finely crafted article. Thank you so much, Paul; we LGBT who actually do hold allegiance to the ideals of tolerance, understanding, love, and mutual respect in belief and discourse are not at all pleased with, nor do we support, the intolerance, hatred, bigotry, and bullying behavior of non-elected leaders like those of Freedom Indiana and the paid political left of center liberal so-called (paid!) activists who are ubiquitous at staged political rallies and marches.

Many of us LGBT are also deeply alarmed at the growing hatred of and intolerance for Christians. I continue to wait for a lesbian couple or gay male couple to sashay into a bakery operated by Muslims and demand a wedding cake; thank God I am not holding my breath. The left liberal gays and lesbians would NEVER have the guts to challenged Islam or Sharia. NEVER. And it is Islam the religion of intolerance to LGBT to the point of putting us to death without a second thought.

I believe most Hoosiers and most Americans subscribe to "live and let live"; it is understandable that when hate mongers of the LGBT liberal left insist on cramming their ideas down others' throats, others will resist. I predicted a very long time ago that the left liberal LGBT's would never stop at "equal rights" law victories nor would they stop with same-sax marriage... it's always a new crusade, it's always "more needs to be done", etc.

Look at the damage Freedom Indiana and it's unelected headliners wrought. But I wonder if they really care... when you get to know some of these people as have I, you will find them perpetually angry, perpetually unhappy, and perpetually fighting battles of their pasts through the political system.

It's time to start taxing the churches. If they don't want to live up the their side of Separation of Church and State, make them pay. I'm tired of religious organizations draining our courts and taxpayers money with this and abortion. Enough already.

I thought Christians were suppose to love the sinner, but not the sin. These Christians today are just a bunch of intolerant, hateful bigots. Most of them would go to Hell, if Hell was real. Isn't God the only one that is suppose to judge?

Anon 2:52, not sure how you got that out of what I wrote. I think the point I made is that it is some in the LGBT community who are intolerant and hateful toward people I disagree with. Those who support what happened to the Kleins are evidence of that.

Paul, you know the law, you tell me if I am wrong regarding the all-too-often uniformed belief regarding "separation of church and state".

It is my understanding that nowhere in the US Constitution can the words "separation of church and state" be found nor is there any concept in the Constitution that this supposed "separation" is "the law of the land". Many unintroduced to the US Constitution with even a passing familiarity continue the misinformation. I understand that the Religious Clause of the First Amendment prevents Congress from establishing a particular religion- and immediately following is the free exercise clause liberals conveniently almost always neglect to include "...or prohibiting the free exercise thereof".

I believe I am being accurate by boiling it down this way: the phrase "separation of church and state" may have originated with Thomas Jefferson's letter explaining that a "wall of separation between church and state would not allow any US Congress to prevent Americans from practicing their faith." Left liberals today, however, seem to have an ongoing war with Christians and sure do seem hell-bent on prevention Christians from following their religious beliefs. Left liberals do not, however, seem to have the guts or the spine to challenge Mohammed or Islam as often as they war against followers of The Christ.

I fail to see that anyone or church has anything to live up to on "their side" regarding "separation of church and state" when the US Constitution says nothing like that at all.

And no, I don't see how many of these commenters derive from your article that about which they in uneducated fashion complain about in their comment postings.

Anon 4:03, indeed the phrase separation of church and state appears nowhere in the Constitution and likely was first uttered in a letter Thomas Jefferson wrote to the Danbury Baptists in explaining what the First Amendment meant.

Freedom is not negotiable, for gays, Christians or anyone.

The best thing about all of this is that more people are seeing religion for what it really is... Nonsense.

The best thing about this is people are finally seeing "gay marriage" for what it is:
an attack on normalcy by the weak, unattractive and degenerate.

LGBT is a notional network; not a jurisdictional reality or community, where diversity is organic & not contrived or formulaic. Likewise, there are no white, black, hispanic, etc., communities; but political networks over-claiming or referencing same.