On Monday, a bipartisan resolution will be introduced at the Indianapolis City-County Council calling for the towing of Blue Indy cars.  Blue Indy cars are electric cars that are part of the a private company car sharing program.  The Mayor had asked that customers of Indianapolis Power & Light subsidize the charging stations through higher rates, a proposal rejected by the Indiana Utility Regulation Commission.  The Blue Indy cars are not approved for use in the United States due to a
lack of safety features and the charging stations also do not meet legal requirements. That, however, has not stopped Mayor Ballard from proceeding full-steam ahead with the program. 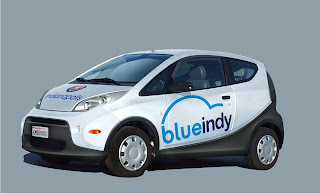 The curbside charging stations for electric cars being installed across the city are seen by Mayor Greg Ballard as key to an environmentally friendly future — electronic filling stations where, for a couple of bucks, drivers can juice up their Teslas and Volts overnight.

But some small business owners, living in the here and now, say the stations — dedicated mostly to the BlueIndy electric car-share vehicles — are gobbling precious parking spots in premium locations and could cost them customers.

“It hurts us because  we’re the type of place where people run in and out and like parking for just a few minutes,” said Joe Vuskovich, owner of Yats, a Cajun restaurant at 54th Street and College Avenue, a few steps from five just-installed chargers.“If people have to park three or four blocks away they might not come at all.”

The dispute is one of several signs of growing tensions over the BlueIndy electric car-sharing program, one of Republican Ballard’s major initiatives to make the city more “green” and position it as a leader in alternative transportation. When the program is at full strength, BlueIndy will have 500 electric rental cars perched at 200 locations, each with five chargers.

While councilors are fielding complaints by business owners and patrons about the lost parking spaces due to Blue Indy, they need to pick up the ACS (Park Indy) 50 year privatization contract and review what it says about compensation to the vendor for taking parking spaces out of Commission.  The contract says that only a maximum of 200 metered parking spaces can be eliminated during the entire lifetime of the contract.  Once 200 spaces are eliminated, the City owes compensation for revenue that those meters would produce for the next 50 years.  How many metered parking spaces are being removed pursuant to the Blue Indy program?  Are we going to be at 200?  Are the hands of the next mayor going to be tied by Mayor Ballard using all 200 freebies during his term?

While councilors are at it, they need to be asking about temporary closures as well.  In the contract, the City can only take meters out of commission on a temporary basis for 6% of the days the meters are in operation (365 days minus Sundays and some holidays).  That's about 18 days.  Scores of meters have been closed "temporarily" for over 18 days.   For each meter closed temporarily in excess of 18 days, $20 per meter is owed daily.

To give you an example of how the temporary compensation provision works, about five parking meters on Market Street, in front of the PNC Bank, near the intersection with Delaware Street.  The meters are probably bagged as "No Parking" spots half the time I go downtown.  Let's say they are out of commission of 150 of the 300 days the parking meters are in operation.  That would trigger compensation of 5 x $20 = $100 x 150 days = $15,000.

The way the contract is set up the credit to Park Indy for closed meters are made after the City's revenue share is determined.  That way city officials can brag about how much in revenue the privatization contract has earned for the city while not give the real pictures that includes reduction in that revenue for closed meters.

Gary Welsh of Advance Indiana, who broke the original story, has a good article on the subject of the Blue Indy Council resolution being introduced on Monday.
Posted by Paul K. Ogden at 1:05 PM

In the realm of "due diligence;" how is it we have this issue of unapproved charging stations & cars? Who advises the city on this stuff & how exactly did this happen? Do car dealers or home stores sell items similarly non-approved?

OT, the ROC has dozens of solar arrays on site guess whose paying for that?

Our doofus mayor can't do basic math so what does he care, it's other peoples money anyway.

That liberal Democrat Zach Adamson now hitches his boat to Councilor Christine Scales- whom many of us Marion County voters believe is the most admired, most respected, and most honorable City Council member Indianapolis has been blessed with in a very long time- is completely stunning to me in that Zach Adamson seems to have been a proponent who praised Blue Indy before he was against and criticized Blue Indy. Can a City Councilor be wrong so many times on so many issues? The best I can throw out in Adamson's defense is that he has a great deal of company in the Council chamber.

With the notable exception of Christine Scales, many Democrat and Republican CC Councilors have been highly compliant (sometimes by vote, most often by inaction and silence until speaking up becomes politically advantageous) and allowed Mr. Ballard to continue his path of unilateral rule and lawlessness that sure seems to me a detriment to the law and to the best interests of everyday Marion County residents like me.

As a downtowner from the early 1980's to today and whose ancestors established homes and businesses in Center Township in the early 1900's, I can attest that the quality of life here is suffering from the congestion of streets with restricted traffic flow, the loss of parking as noted in the original post, shoddily constructed and boringly designed apartment/commercial buildings, the loss of sunlight, open spaces, and skyline vistas making me feel like a mole.

I am all for progress but crony special interests such as the illegal and very poorly thought out Blue Indy Car scheme Adamson once proudly approved of and supported, Vision Fleet, the new justice center travesty, ROC (lest we forget), almost any TIF and increased or new Marion County fee or tax, ad nauseam, well, none of these are "progress". There is a reason Marion County is emptying out to the north suburbs even beyond Carmel, Brownsburg, Greenwood, Fortville, Avon and Plainfield.