Yesterday I had a conversation with a misguided attorney friend (MAF) when our conversation wandered into the area of the death penalty.  MAF declared that the death penalty was abhorrent and should be abolished.  He talked about how society had evolved since the Constitution was originally adopted.  I told him that was fine - that state legislative bodies can always proscribe the death penalty in their jurisdictions.  That is not good enough for MAF.  He wants the 8th Amendment prohibition on "cruel and unusual punishment" redefined to ban the death penalty across the country. 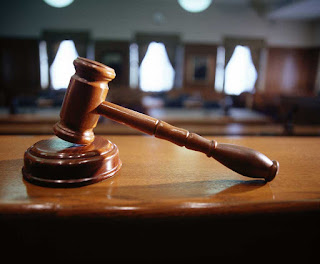 Of course, the Constitution and its amendments three times refer to capital punishment so it is crystal clear that the Founders never intended for the Eighth Amendment to ban the death penalty.  MAF doesn't care.  He believes that judges should be able to redefine constitutional provisions to keep up to date changing societal mores.  His philosophy is that the Constitution is a living document that judges can change the meaning of whenever they see fit.

I have asked MAF exactly what limits he there should be on judges simply rewriting the Constitution to incorporate their own beliefs.  He assures me that the actual written words of the Constitution still would provide some guidance and judges would still be bound by precedent.  But when it come to the Supreme Court, the justices on that body are not bound by precedent.  They can make things up, finding new rights that nobody had found before.  Just this past year, the justices found for the first time in nearly 150 years that the 14th Amendment barred states from defining marriage as solely being between a man and a woman, enshrining same sex marriage as a new civil right.

Of course, the Court could have simply found the Constitution was silent and left the issue of whether to redefine marriage to state legislatures.  But many in the legal community take it for granted that judges, usually the unelected federal variety, should follow and sometimes lead public opinion by redefining the Constitution.  No need to wait around for the democratic process to play out when we have learned men and women wearing black robes that can impose by judicial fiat "good law."

Such an attitude is nothing more than intellectual elitism, an idea that those who don black robes are bestowed with knowledge superior to average men and women.  I noticed that intellectual elitism during my first days of law school.  During a Constitutional Law class, I argued that since the Constitution was silent on an issue it should be left to the state legislatures to decide.  One of my classmates dismissed my assertion, saying that important public policy issues should not be left to the "pig farmers" elected to state legislatures.

Having grown up in a farming community, I certainly know better than to dismiss the wisdom of farmers and others who choose to make a living with their hands instead of their minds.  Having worked three sessions in the Indiana Senate, I also knew that, despite the messy nature of the legislative process, there exists a collective wisdom in the legislature that often far exceeds that of individual judges.   That judges should defer to legislative bodies, which represent the will of the people in free and fair elections, is exactly the way our system was intended to operate.

Unfortunately, MAF remains an enthusiastic believer in intellectual elitism.  He is perfectly fine being ruled by unelected federal judges instead of the elected representatives of the people.  I'm not sure there is any cure for his terribly misguided thinking.  There is still hope for others, however.  We need, however to do a better job of educating law students, and judges to be, on the important role legislatures play in our constitutional system.
Posted by Paul K. Ogden at 3:34 PM

BS to MAF and your contention that judges should defer. The miseducation of lawyers in this country leads to these sorts of conclusions and expansion of government to areas never contemplated. The express provisions of the Constitution were in place to restrain government and its grasping hands and its tendency to consolidate and it propensity to rule by fiat and to consider itself and its actors as being bound by no law. I think the judges owe duty to the Constitutions first, to the written laws second, and no deference to anyone. Of course, we live in an area where our judges pay bribes to be judges.....so.....

I fear for the Nation because so many of the generations younger than mine have zero, zero!, clue about the actual underpinnings of America, why it was founded, and what the Declaration and US Constitution really "say" and what those docs truly mean. The younger folk [about 1960's on] are products of an educational system commandeered long ago by the liberal left and viewpoints like MAF are what we have to show for it. We've had people like that goofy, prickly arrogant Witte who would rather shut up an honest attorney than weed out the corruption endemic it seems in his profession.

There is no longer a Constitutional Republic- and when you say that people give you deer in the headlamp looks; indistinguishable from each other, the liberal Democrats and the establishment Republicans have, to use Marxist Obama-speech, transformed a free Country into a soft tyranny and a police state.

We are no longer free. And with friends like MAF, we will be worse off in the very near future.

Law schools, at least the law schools that matter and crowd the top of the rankings, speak of legislatures derisively.

In law school, it's clearly taught that judges are not bound by anyone.

Citing a statute in law school will get you low marks. What law schools accept as authority and proof you're learning is employing "reasoning" that pretends to rest an argument on a theory of law purportedly gleaned from a stack of citations.

The people behind judicial power want autonomy from all regular governmental restraints. They're even so untrustworthy that they don't even want the people to be able to elect their own judges, though the judges make the laws that govern the people.

Food for thought; is true intellect burdened with the clubby constraints of "elitism?"

Paul, subsequent to reading your blog entry I ran across a story where a short paragraph reminded me of MAF and the trouble with those who either ignorantly or intentionally prefer a permanent ruling class believing itself to be the masterminds we the unclean, unwashed, everyday types "need"...

It just happened, by the way, that he author* was discussing same sex marriage as an example and I do not wish to give rebirth to this tired subject. Also, the brackets are mine and intended to make the point about MAF: "...Obama [and any liberal like MAF] has gladly accepted the Supreme Court’s illegal rulings on ObamaCare and gay marriage. It does not bother him [any liberal] that the votes of 50,000,000 Americans were overruled by 5 rich, unelected lawyers. It doesn’t bother him [or any liberal like MAF] that administrative law created by unelected bureaucrats has a huge adverse impact on Americans..."

*Conversations About The Obvious

Paul, if you want an example of the illegal, out-of-control, autocratic judiciary, look here: