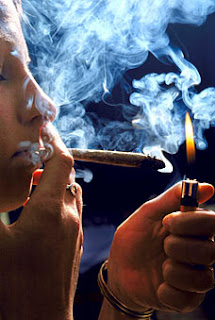 Levin has secured a southside building with plans to open services on July 1st, the day Indiana's Religious Freedom Restoration Act takes effect. With the focus on RFRA and the IRS's approval of tax exempt status, Levin has projected the message to "followers" who pay monthly dues of $4.20 to the church that they will be able to smoke pot free of Indiana's laws prohibiting possession and use of marijuana.  By making such representations, Levin is exposing church participants to criminal prosecution and the church, and possibly himself, to civil liability.

The media has fawned over Levin's church and simply accepted at face value that Levin's idea is a new one made possible by Indiana's adoption of RFRA.  Of course if the reporters were not so lazy maybe they would have bothered to look at litigation in the other 30 states that have adopted RFRA's principles either by legislation or judicial fiat.  If they had done some research, they would have learned that Levin's idea is not creative or new.  There are at least 10 published appellate decisions in which RFRA was used as a defense to criminal charges for marijuana use.   In every case the defendant lost.

After Congress in 1993 nearly unanimously passed the federal Religious Freedom Restoration Act, a bill signed into law by President Bill Clinton, a Wyoming resident decided to found the "Church of Marijuana."   When he was charged with possession, the resident, now a defendant, mounted a RFRA defense claiming he was a "Reverand" in the "Church of Marijuana" that he had founded twenty years earlier.  In the U.S. v. Meyers, the Wyoming district court began by observing:


As is true of the First Amendment, RFRA could easily become the first refuge of scoundrels if defendants could justify illegal conduct simply by crying "religion." To assert a free exercise defense, a defendant first must show that his "religion" is bona fide. Yoder, 406 U.S. at 215-16, 92 S.Ct. at 1533-34. On this issue, the Fifth Circuit has aptly observed:

While it is difficult for the courts to establish precise standards by which the bona fides of a religion may be judged,[*] such difficulties have proved to be no hindrance to denials of First Amendment protection to so-called religions which tend to mock established institutions and are obviously shams and absurdities and whose members are patently devoid of religious sincerity.

Even though the "Church of Marijuana" had a 20 year history, the court still found it was a faux religion that was created merely as an excuse to smoke pot.  Levin's case is much weaker than Meyers'.  Unlike Meyers, Levin did not come up with the idea for a "religion" until after RFRA was adopted in Indiana.  If Levin can find a court that will take his First Church of Cannabis seriously, I would be surprised.

In State v. White, an Idaho resident who was charged with marijuana possession asserted the claim "the sacrament of Marijuana is a gift from my creator and I enter into the experience of Marijuana with the intent to bless it.   The sacrament of Marijuana helps me be more receptive to ideas and the ultimate vision of my religion, by setting aside the mundane, and entering into the profound."  White further claimed that "[m]arijuana is taken as a holy sacrament during certain spiritual rituals, honoring the Savior." He also cited to bible verses which he claimed sanctioned the use of marijuana.

The Idaho Court of Appeals was not persuaded with White's RFRA defense finding that he was merely using the beliefs of various recognized religions "to meld into a justification for his use of marijuana."  The court concluded that the evidence did not establish that his marijuana use was motivated by a religious belief."

With regard to Levin's First Church of Cannabis, certainly Levin and most of the church's congregants used marijuana long before Levin thought of establishing a church that integrated marijuana use in the services.  Thus, Levin claiming his use and the church members' use of marijuana is based on religious beliefs is dubious at best.   (Other cases, State v. Cordingly and State v. Pederson which reached the same conclusion as the White case.)

Some courts though have chosen, probably wisely, to focus on the other parts of RFRA to dispose of the defendant's defense to marijuana prosecutions.  To recap, under RFRA if a defendant can show that a law: 1) substantially burdens his legitimate religious beliefs, then the burden shifts for the state to show: 2) a compelling interest in the law; and 3) that the law is the least restrictive means for advancing that compelling interest, in other words that the law is narrowly tailored.

In the 1998 case, State v. Balzar, the defendant raised a RFRA defense.  The Washington Court of Appeals found that the state had a compelling interest in regulating the possession and use of marijuana:


In light of the substantial case law recognizing other compelling state interests in the context of religious free exercise, as discussed above, and considering the "social realities" of marijuana's effects and dangers, as recognized by the Legislature and Congress, we hold that the State has a compelling interest, in its enforcement of laws regulating drugs listed as Schedule I substances. See Mood for a Day, Inc. v. Salt Lake County, 953 F.Supp. 1252 (D.Utah 1995) ("The compelling nature of the state's interest in fighting illegal drug use can hardly be questioned. Congress, state legislatures, courts, and other government entities have long recognized serious societal problems associated with the use and abuse of controlled substances, including marijuana."). In State v. Hardesty, an Arizona resident claimed that Arizona's RFRA protected him from prosecution for possession of marijuana because he consumed marijuana as a sacrament as part of his membership in the "Church of Cognizance."  In the 2009 decision, the Arizona Court of Appeals cited approvingly the Balzar court's conclusion that there is a compelling interest in laws prohibiting the possession and use of marijuana.  The court then cited additional case law:


Other state and federal courts have reached similar conclusions about the dangers of marijuana.  See Rupert v. Portland, 605 A.2d 63, 66 (Me.1992) (stating that statute making possession of marijuana illegal reflects "legislature's determination that marijuana poses a threat to individual health and social welfare"); Mood For A Day, Inc., v. Salt Lake County, 953 F.Supp. 1252, 1262 (D.Utah 1995) ("Congress, state legislatures, courts, and other government entities have long recognized serious societal problems associated with the use and abuse of controlled substances, including marijuana."); State v. Smith, 93 Wash.2d 329, 610 P.2d 869, 875 (1980) (finding that marijuana use "creates a euphoric state of intoxication which impedes learning, incentive, efficiency, and, importantly, motor coordination"); Town v. Florida, 377 So.2d 648, 650 (Fla.1979) (stating that in Florida "cannabis remains a dangerous drug"). Thus, in light of the legislative history and legal precedent, we conclude that the State has a compelling interest in banning the possession of marijuana

In both Balzar and Hardesty, the courts had no problem also finding that the government had satisfied the "least restrictive means" part of the RFRA test.

Bottom line is that Bill Levin's First Church of Cannabis is not even remotely unique and claims that Indiana's adoption RFRA opened the door to the establishment of the church are as phony as the religion-hating Levin's claim to now be a religious leader.  If the Church's congregants think that RFRA provides them a legal defense to their consumption of a controlled substance, they are either being fooled or are fools.  Take your pick.
Posted by Paul K. Ogden at 2:41 PM

Why wouldn't this new "church" seek an opinion from the state's AG, to protect members from prosecution, civil forfeitures, etc. & itself from fraud allegations, etc., prior to investing time & treasury?

Is this more about who they hate than love or the Church of Can I Bitch (about Christians)?