Late last week, Democratic presidential candidate Hillary Clinton called for automatic registration of voters at age 18 and to have Congress mandate that states have a 20 days of early voting prior to an election.  She also called out Republican Governors, including presidential candidates Scott Walker and Rick Perry for signing "restrictive voting laws," such as the requirement that voters present a photo ID when voting. 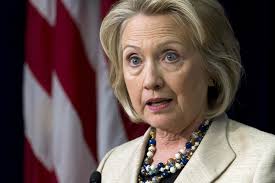 Clinton's proposals are nothing more than red meat to hard-core Democratic partisans.  Voters overwhelmingly support voter identification laws.  In a Rasmussen poll last year 78% of the respondents said they support photo ID laws while only 18% oppose.   Yet Democrats continue to push the meme that Republicans are engaging in "voter suppression" by adopting such requirements.

Indiana's experience with photo ID law illustrates the silliness of Hillary Clinton's claim. The Hoosier state was one of the first states to adopt a photo identification requirement, requiring the ID be "government-issued" and contain an expiration date.  While Hoosier Democrats claim that this has suppressed voting in Indiana, they struggle to produce more than a handful of voters disenfranchised by the voter ID requirement and, upon closer examination, those examples are usually flawed.   In the extreme situation in which a wannabe voter wants to vote but astonishingly lacks a photo ID iin this day and age, Indiana requires the BMV to provide those folks for free identification card that can be used for voting.

In addition to the lack of individual examples in support of the Democrats claim, turnout numbers do not support the argument  If you look at voting as a percent of the population 18 and over, turnout in Indiana has generally increased (albeit slightly) since Indiana adopted the photo ID requirement.

What Indiana Democrats don't seem to want to talk is Indiana's soaring registration rate.  In 1988, 69.6% of the adult age population in Indiana was registered to vote.  By 2012, registration of Hoosier adults had soared to 92.9% (which was actually a decrease from 93.7% in 2008.)  During the 24 years between 1988 and 2012, Indiana's population increased by 19% while the state's voter registration rolls increased from 2,866,339 to 4,555,257, a 59% increase.  Several Indiana counties, including Marion County (Indianapolis), has had elections where more than 100% of the adult population was registered.

Could the increase in registrations from 1988 and 2012 be explained by a sudden surge in the popularity of registering to vote (but not actually voting) in the Hoosier state?   Highly unlikely.  Rather the increased registration figures is almost certainly the result of provisions of the National Voter Registration Act (Motor Voter) that eliminated automatic purges of voters for non-voting.  Indiana's voter registration rolls are filled with the names of deceased voters and voters who have moved.  In a rare moment of Democratic honesty on the issue, the Marion County Democratic Chairman recently said that Indiana's turnout numbers are artificially low because of bloated voter registration rolls.  Indeed.

Of course, even attempting to clean up the rolls raises howls of protests from Democrats.  Now that Indiana is finally following the lead of other states and doing cross-checking to eliminate duplicates registrations of moved voters, Hoosier Democrats have joined Democrats in other states in claiming  that cross-checking voters and eliminating duplicates is voter suppression.  Of course, they can't provide any evidence that people are being denied the right to vote by cross-checking.  But when it comes to claiming the Republican Party is engaging in voter suppression tactics, Democrats don't let a lack of evidence get in the way.

Likewise automatic registration is unlikely to increase the numbers of voters.  But that's beside the point.  These voting issues raised by Hillary Clinton are entirely about providing something for her Democratic base, the hard-core partisans who froth at the mouth over any effort by Republicans to secure the integrity of the ballot.
Posted by Paul K. Ogden at 10:57 AM

I've done a lot of thinking on this matter, and it is easy to say that it is a worthless proposal, but is it possible to have contradictory beliefs about this important voting issue.?...my view is that I have no problem with requiring a photo ID to vote -- to me that is a no brainer -- I want some assurances that the person voting is actually the person he or she says he or she is..And frankly, if you can't figure out how to get a photo ID in this day and age, maybe you should NOT be voting -- you have far more serious issues......on the other hand, I HAVE NO DOUBT whatsoever that the Republican party is using voter ID laws and other similar restrictions to prevent Democratic-leaning voters from turning out in higher numbers.As a former Republican, one who toiled long and hard for numerous Indiana Republican candidates at the state level for a few decades, (and as a believer (call me naive) in our American system of voting and government) I find this appalling.This is not just happening in Marion County, the state of Indiana, but in numerous other states -- and it is one more sign of the pending doom of the GOP.....This is an organized -- perhaps ALEC -- or national GOP driven activity, and it is really distressing to me as to how far overboard the GOP has gone...

Question....How does someone UN-register. Sure would like to do so. Really tired of the political junk mail, surveys, etc. in the mailbox.

Anon 4:08, that's an interesting question. Not sure how you unregister to vote. I doubt though that's the source of the political mail though.

Under Indiana's REAL ID, it's very difficult to get an ID card from the BMV. The BMV gets a sadistic delight in sending everyone away to get more paperwork, so it's just not worth it to return.

Voter ID is great for keeping registered voters only everyone white who owns a house.