While everyone else is focused on New England Patriots Quarterback Tom Brady being suspended for four games for Deflategate, little attention has been given to the fact that Patriots on May 6th "indefinitely suspended" officials locker room attendant Jim McNally and assistant equipment manager John Jastremski.  McNally, who called himself "The Deflator" is the Patriots 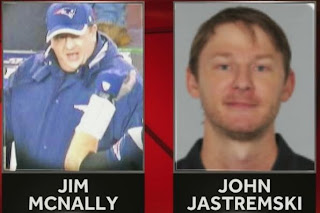 employee who was determined by the NFL to have done the deflation before the AFC Championship game and quite likely on other occasions.  Jastremski acted as the go between with Brady and McNally.

The NFL should not allow McNally and Jastremski, undoubtedly two low paid employees in the organization, to lose their jobs permanently over merely following the orders of Brady.  They were put in an impossible position.  If they would have rebuffed Brady's order to deflate the footballs, they would have undoubtedly lost their jobs.  But because they followed his orders and were caught, they should be punished?

McNally and Jastremski may be like a lot of lower middle class Americans who are living paycheck-to-paycheck.  They now face unemployment and likely won't qualify for unemployment benefits because their employer had "cause" for their firings because of their misconduct.  Meanwhile, Patriots Quarter Tom Brady still has that $100 million net worth to fall back on and no doubt will still be able to afford to fly around on private jets with his even wealthier supermodel wife.

If the Patriots' "indefinite suspension" of these employees is allowed to stand, that sends the signal to all lower level NFL employees that you better be willing to do everything you can to help coverup wrongdoing by your team, including lying and hiding evidence, or you're going to lose your job.
Posted by Paul K. Ogden at 9:45 AM

thanks for bringing this up. Well argued.

After working for years for Corporate America the pressure to produce results is always there. It is like musical chairs. The music stops and you have no place to sit.

McNally and Jastremski, were as you alluded to, were low level pawns. Pawns can be sacrificed to protect the power pieces. I am amazed anything was committed to electronics and thus to paper so to speak.

Cheating in sports should come as no surprise. Millions of dollars are the reward for winning. Spit balls, scuffed baseballs, steroids, point shaving, etc., is not a surprising outcome. Sports is very big business. Big business has engaged in cooking the books sometimes with the collaboration of accounting firms. Why would anyone think that corruption would be limited to the Bernie Madoffs, Toxic Assets, or bid rigging of interest rates and somehow magically stop at the Professional Sports.

If I were these guys, I'd be singing like a birdie to whatever media outlets that would take my story.

The Mega-Media including the Indianapolis Star are just all over this story of Tom Brady and the Patriots.

I am a Veteran and I find this sickening in the extreme. We have Vets that died waiting for Care from the VA. The greed of the NFL has no boundaries.

Unfortunately prosecutions of corporate America seem to follow this same playbook. After the financial collapse in 2008, the only people who went to jail for institutionally encouraged mortgage and securities fraud were some low level mortgage brokers and home owners. None of the high level bankers were punished, or even indicted.

I smell a book deal for these guys. They probably have seen and heard a lot of insider stuff. What they did not see or hear, given their record, they could make up.

@Flogger
The comment about NFL teams receiving DOD money is disingenuous at best. No one would raise a stink about the Indiana National Guard buying a 20-second commercial spot on Fox 59 to boost recruitment efforts. In fact, it would be applauded. "America!", people would boast.

But the fact of the matter is that is exactly why the Colts (one amongst many) receive DOD money. They are selling airtime on their jumbotron just like any other media outlet sells airtime.