Paul H. Tice has an interesting editorial in the Wall Street Journal about national science standards developed in 2013 and which have been adopted in 13 states: 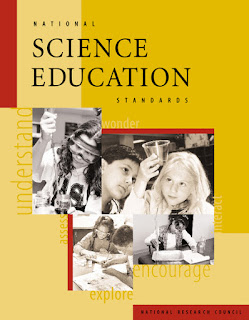 While many American parents are angry about the Common Core educational standards and related student assessments in math and English, less attention is being paid to the federally driven green Common Core that is now being rolled out across the country. Under the guise of the first new K-12 science curriculum to be introduced in 15 years, the real goal seems to be to expose students to politically correct climate-change orthodoxy during their formative learning years.

The Next Generation of Science Standards were released in April 2013. Thirteen states and the District of Columbia have adopted them, including my state of New Jersey, which signed on in July 2014 and plans to phase in the new curriculum beginning with the 2016-2017 school year. The standards were designed to provide students with an internationally benchmarked science education.

The National Research Council framework for K-12 science education recommends that by the end of Grade 5, students should appreciate that rising average global temperatures will affect the lives of all humans and other organisms on the planet. By Grade 8, students should understand that the release of greenhouse gases from burning fossil fuels is a major factor in global warming. And by Grade 12, students should know that global climate models are very effective in modeling, predicting and managing the current and future impact of climate change....

Tice goes on to note problems with relying on government propaganda while discouraging students from exercising critical thinking skills:


Relying on a climate-change curriculum and teaching materials largely sourced from federal agencies—particularly those of the current ideologically driven administration—raises a number of issues. Along with the undue authoritative weight that such government-produced documents carry in the classroom, most of the work is one-sided and presented in categorical terms, leaving no room for a balanced discussion. Moreover, too much blind trust is placed in the predictive power of long-range computer simulations, despite the weak forecasting track record of most climate models to date.

This is unfortunate because the topic of man-made global warming, properly taught, would present many teachable moments and provide an example of the scientific method in action. Precisely because the science of climate change is still just a theory, discussion would help to build student skills in critical thinking, argumentation and reasoning, which is the stated objective of the new K-12 science standards.

For instance: Why has the planet inconveniently stopped warming since the late 1990s even as carbon dioxide levels have continued to rise? How reliable are historical measurements of average global temperatures and atmospheric carbon dioxide levels when, before the 1950s, much of the data are interpolated from such diverse sources as weather balloons, kites, cloud observations, primordial tree rings and Antarctic ice bubbles?

How statistically significant is a 1.4-degree Fahrenheit increase in average global surface temperatures since 1880 for a 4.6 billion-year-old planet with multiple ecosystems and a surface area of some 200 million square miles? How dangerous is the current level of carbon dioxide in the world’s atmosphere, when 400 parts per million expressed as a percentage of the volume of the atmosphere would equate to only 0.04% or approximately zero?

Employing such a Socratic approach to teaching climate change would likely lead to a rational and thought-provoking classroom debate on the merits of the case. However, that is not the point of this academic exercise—which seems to be to indoctrinate young people by using K-12 educators to establish the same positive political feedback loop around global warming that has existed between the federal government and the nation’s colleges and universities for the past two decades.

"Climate Change" is a ready adjunct to the relentless attacks on autonomy and freedom of personal mobility.

They want to get us out of our cars, out of our houses, and into high rises.

They really don't care what happens to climate. This is about control and power.

The weak and the homosexual prefer higher residential density to increase the availability of partners, so that's where we're being driven.