For political insiders, Tuesday's election results were interesting in that they featured defeats of party organization endorsed candidates in 2 of 3 races as Republican Christine Scales defeated endorsed Tim Craft and Democrat Jared Evans bested Stephanie Vibbert who had the support of the local
Democratic organization.  In the only party organization win of the night in council races, the Democrats' slated candidate Leroy Robinson knocked off incumbent district councilor Angela Mansfield by 35 votes. 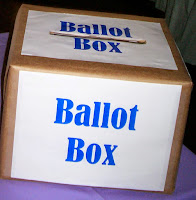 It is significant that the poor 1 of 3 record was compiled during a municipal primary, the lowest turnout election.  The party's slate has always done the best in primaries that feature low turnout in which only hard-core partisans are voting. With turnout in the primary at 7.72%, the candidates chosen by the party organizations bosses should have ruled the day. But they didn't.

Traditionally slated candidates have enjoyed several advantages over primary challenges:  These include:
It is apparent that the endorsement conferred by slating is not persuading even hard core partisans that the "best" candidate is the one who is slated.  In recent years, party bosses have used their appointment power to further stack the deck against candidates they don't want to get the endorsement.  As a result, slating contests which at one time were very common, are rare anymore.  If someone doesn't have the blessing of his or her party chairman, the possibility of being slated is virtually zero.

Slating still bestows a money advantage.  The collective resources of the party will swamp all but the best funded challenger.  But even this advantage is declining as the party increasingly finds itself strapped for funds.

The information advantage is the major card slated candidates have.  Without a good list of likely primary voters, a list that includes names, addresses, primary history and preferably phone numbers and emails, a challenger is likely defeated before he or she even begins the race.  Even in a small enough district in which the challenger can meet primary voters at their doorstep, not having a list of likely voters means the challenger is going to waste enormous resources contacting people who aren't going to vote in a low turnout primary election.

The Marion County slating process is not going to end anytime soon. But if party bosses want it to have some relevance, if they want it to be something respected by grass roots party workers and the party electorate, they would be well advised to make changes to the process to make it more democratic and fair.
Posted by Paul K. Ogden at 9:50 AM

Why would thinking adults waste their time & treasure with the establishment of either party; designed to fail the many & benefit a select few, stranded in a high school culture of arrested development?

Boggs is right- I saw up close and personal and see today the system failing the many to benefit the connected few in the Marion County GOP. The same occurs with the just-as-corrupt Democrats.

Because I am not an establishment RINO Marion County "R", I am persona non grata... but with the devolution of "slating" and the Honorable Christine Scales victory over Darth Vader and the Dark Side of the Marion County GOP and the rejection of many political puppet candidates- I am again considering to become even more active and vocal in the process...

The Marion county GOP is a Soviet style organization.