The city and BlueIndy have reached an agreement to close a $13 million shortfall to get the stalled electric car-share service up and running.

The city will pour more than $6 million from parking meter revenues to help construct charging stations and Bolloré, the company that owns the service, will pitch in another $6 million, bringing the company's commitment to more than $40 million.

But the deal has angered a council leader, who said the administration of Mayor Greg ﻿ 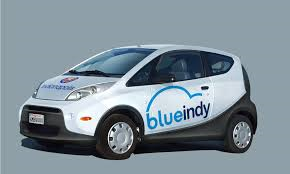 Ballard is inappropriately using targeted infrastructure dollars for a "boondoggle."

This is outrageous, this is the second time he's done this," said Public Works Committee Chairman Zach Adamson, referring to Ballard's spending $5 million in infrastructure money on an Eastside sports and cricket complex....

Adamson said parking meter dollars can be used only for infrastructure improvements in metered zones and said electric cars don't count as infrastructure.

Mayoral spokeswoman Jen Pittman said because the charging stations are open to the public to charge their own electric cars, the dollars are being properly used on infrastructure....

Council Chief Financial Officer Bart Brown said the administration seems to be legally entitled to shuffle the money but "they are stretching it."

I think Adamson is right. Pursuant to IC 36-9-12-14, parking meter money is supposed to go into a special fund which can be spent "only for the purposes listed in subsection (b)" of that statute. Those limited purposes are as follows:
Gary Welsh of Advance Indiana has also penned an article "Ballard Stealing Parking Meter Revenues To Pay For Electric Car Sharing Program" on this topic.
Posted by Paul K. Ogden at 11:06 PM

As far as this voter is concerned, Democrat Zach Adamson's initial promise of a breath of fresh air in City government turned acrid long ago. Zach Adamson is an expert at using any issue most voters agree on to his complete
advantage. And while Adamson is a Municipal Economics 101 pretender- Councilor Adamson was chomping at the bit to shovel loads more of our hard earned tax dollars at Bill Oesterle's corporate welfare scam known as Angie's List and it was Adamson who excused away his acceptance of digital billboard special interest campaign donation payola while whining that "the fact is that political campaigns are expensive..."- I give Zach credit for finally discovering a spine when it comes to Greg Ballard's lies and this idiotic electric car scheme.

Even more than Bill Hudnut learned, Ballard will soon spin in the wind by his lonesome, completely adrift from all the MCRCC "leaders", the crony attorneys and the campaign donation developers who bought him off to line their pockets. God Lord, how could we have twice elected as mayor such an ignorant human being?

All that being said, where the hell are the other Councilors on this issue? I'd love to hear from at least one side of Jeff Miller's face.

The Meter-Electric Car deal may totally violate Indiana Law. No problems though for the Crony Capitalists and those who carry the water for them.

1.) You must have a City-Council that is willing to stand up in a loud voice and tell Ballard - NO!!!

2.) You need a Media that will provide unbiased details and an investigation.

3.) Lastly you need a Prosecutor that will pursue wrong doing.

We have none of these 3 elements here in Indianapolis.

Flogger, you are right. When even the Democrat Councilors under the completely inept Maggie Lewis... who dresses as though her next stroll is on East Washington Street long about 1:30 a.m.... can't even stop our psychologically troubled mayor... things are damn bad.

It's time to visit World sport park and judge your self $5M investment for cricket field - with no publicity, advertising or flyers from the City or the upcoming ICC Cricket event at the world sport park. Media and local public are not aware of this event like many other matters with cricket. City also constructing two more cricket fields at George Washington Park .. City is Spending much more on this sport cricket with no hope for any return from any usage by local cricket club or any events on all those four cricket fields. Does any one know maintenance /operating cost will be needed to keep this cricket fields - for many years to come.

Anon 8:14- listen for the sound of crickets in answer to your questions.