On its website, the Indiana Libertarian Party bills itself as "The Party of Principle."  In the debate over the adoption of the Religious Freedom Restoration Act the Libertarians set aside that slogan as well as the party's longstanding commitment to fighting for the Constitution and liberty.

In 1990, the United States Supreme Court handed down Employment Division v. Smith, a case in which the Court, in an opinion written by Justice Antonin Scalia, went way beyond the facts of the
case to fashion a new rule - that any challenges to statutes brought under the free exercise (of religion) clause would fail if government simply showed that the it had a reason to adopt the law and that it applied to everyone. The old Sherbert test, which required that government show a compelling interest in any law substantially burdening religion, was tossed out. 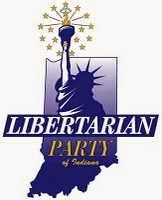 Scalia's pronouncement was opposed by the likes of Justices Brennan, Marshall, and Blackmun, the latter writing the dissent arguing that the Sherbert test be kept to protect religion.

The decision sparked outrage across the country.  Liberal and conservative groups joined together to push for the adoption of a national Religious Freedom Restoration Act which would restore the Sherbert compelling interest test.  In support of the RFRA, the American Civil Liberties Union stated:


For two centuries, the guarantees of the First Amendment has proven to be the boldest and most successful experiment in religious liberty the world has known," Peck added. "A disastrous and erroneous decision by the Supreme Court three years ago has threatened to derail that experiment and make religious freedom a matter of legislative grace. Such an approach is inconsistent with our constitutional heritage and the level of protection the courts afford all other fundamental rights."

In 1997, the Supreme Court held that federalism principles prevented the RFRA's application to free exercise challenges to state laws unless states adopt their own RFRA.   So several states began that task.  Indiana was late to the game, not getting around to it until this year.

Certainly the Libertarian Party, which claims to be a defender of the Constitution, does not think that religious freedom enshrined in that document should be a "matter of legislative grace?"  Well, at least here in Indiana, the answer is a definite "yes."

In response to the firestorm following Governor Pence signing RFRA, Dan Drexler, Chairman of the Indiana Libertarian Party declared in a press release that the "law needs to be repealed."  In support for this declaration, Drexler stated:


When a state’s governor goes on national television and explains that a bill he just signed into law needs clarification, you know the bill is a troubled piece of legislation.

When state legislative leaders from that same governor’s party hold a press conference to explain that the legislation they just recently passed needs to be revisited and clarified, you know the bill is a troubled piece of legislation.

Drexler does not point to anything in the original RFRA that needed clarification.  Scores of law professors had stepped forward explaining what the bill does, why it is needed and that it doesn't "license discrimination."  (Here is one example.)   Drexler ignores all that, simply assuming that the firestorm against the bill and stated need for clarification must have been legitimate rather than what it actually was - a response to a highly successful campaign of demagoguery and disinformation.


Unfortunately, Indiana’s GOP legislative majority authored a bill that slants the “two-way tolerance” Governor Pence sought solidly in one direction.  In doing so, [the majority] jeopardized what otherwise could have been a bill celebrated by all.

Really?  How does the bill slant tolerance "solidly in one direction?"  Once again Drexler doesn't explain what he means.   Instead of judging the bill on its merits, and putting principle above politics, Drexler and other Libertarians chose to jump on the bogus "license to discriminate"  bandwagon to bash the Governor and the Republican majority in the legislature for supporting a bill that actually protects religious freedom.

Paul, did you mean to say "...Dan Drexler, Chairman of the Indiana LIBERTARIAN Party..." (at paragraph eight)?

I believe just about everyone abandoned truth, common sense, and principle when it came to the false, trumped up hysteria about the RFRA and what it really is and the actual history behind the act.

Shame on the Libertarians.

It turns out that Libertarians believe in government coercion after all. Who knew!

My rights, including freedom of association, are not dependent on a constitution, a judicial decision, a law, or a religion.