Tim Cook, the chief executive officer of Apple, is spreading misinformation about a new religious-freedom law in Indiana.

That law and similar ones, he writes in the Washington Post, "say individuals can cite
their personal religious beliefs to refuse service to a customer or resist a state nondiscrimination law." He goes on to claim that they "rationalize injustice by pretending to defend something many of us hold dear. They go against the very principles our nation was founded on, and they have the potential to undo decades of progress toward greater equality."

Cook may not be aware of this point or others that cut against his argument because reporting on this controversy has been abysmal. Cook may also be unaware that the "wave of legislation" that he fears has largely already happened. A very similar religious-freedom law has been on the federal books for 22 years, and that law itself codified a Supreme Court doctrine that had been in place for most of the previous few decades. Nineteen states besides Indiana have similar laws. The laws don't seem to be abetting a rising tide of discrimination based on sexual orientation, or based on anything else.

What these religious-freedom laws say is that government can require people to violate their religious beliefs only when it is pursuing a compelling interest, and must do so in the least intrusive manner possible. Thus the Supreme Court recently ruled under a federal religious-freedom law that a Muslim prisoner doesn't have to shave his beard. These sorts of accommodations have long had a place in American law, and have typically been advanced to protect Muslims, Hindus, adherents of traditional Native American religions and other minorities.

Cook is not the only corporate leader who didn't bother to do the most basic research before spouting misinformation about the RFRA.  Marc Beniof of Salesforce also expressed his ignorance of the law sting "today we are canceling all programs that require our customers/employees to travel to Indiana to face discrimination."  Locally we had Lilly's, Angie's List, the Pacers and the NCAA all expressing considerable ignorance with .

Not only is the ignorance of the corporate and community leaders thick enough to cut with a knife, so too is their hypocrisy.  Salesforce and Apple does business in China.  China.  Human Rights Watch documents abuses of free speech, religion, women and LGBT rights in China:


The government censors the press, the Internet, print publications, and academic research, and justifies human rights abuses as necessary to preserve “social stability.” It carries out involuntary population relocation and rehousing on a massive scale, and enforces highly repressive policies in ethnic minority areas in Tibet, Xinjiang, and Inner Mongolia. Though primary school enrollment and basic literacy rates are high, China’s education system discriminates against children and young people with disabilities. The government obstructs domestic and international scrutiny of its human rights record, insisting it is an attempt to destabilize the country.

One of the most severe crackdowns on these individuals in recent years occurred in 2013, with more than 50 activists put under criminal detention between February and October. Human rights defenders are detained for ill-defined crimes ranging from “creating disturbances” to “inciting subversion” for organizing and participating in public, collective actions. In July, authorities detained Xu Zhiyong, who is considered an intellectual leader of the New Citizens Movement, a loose network of civil rights activists whose efforts include a nationwide campaign that calls on public officials to disclose their assets.

Freedom of expression deteriorated in 2013, especially after the government launched a concerted effort to rein in micro-blogging. The government and the Party maintain multiple layers of control over all media and publications.

Internet censors shape online debate and maintain the “Great Firewall,” which blocks outside content from reaching Internet users in China. Despite these restrictions, the Internet, especially microblog services known as “weibo” and other social media tools, are popular as a relatively free space in which China’s 538 million users can connect and air grievances. However, those who breach sensitive taboos are often swiftly identified and their speech deleted or disallowed; some are detained or jailed.

Unregistered spiritual groups such as Protestant “house churches” are deemed unlawful and subjected to raids and closures; members are harassed and leaders are detained and sometimes jailed.

(Editor Note:  This treatment of religion by government is probably something Cook and Beniof would approve of.)

Women’s reproductive rights and access to reproductive health remain severely curtailed under China’s population planning regulations. While the government announced in November that Chinese couples will now be allowed two children if either parent was a single child, the measure does not change the foundations of China’s government-enforced family planning policy, which includes the use of legal and other coercive measures—such as administrative sanctions, fines, and coercive measures, including forced abortion—to control reproductive choices.

The Chinese government classified homosexuality as a mental illness until 2001. To date there is still no law protecting people from discrimination on the basis of sexual orientation or gender identity, which remains common especially in the workplace.

Same-sex partnership and marriage are not recognized under Chinese law. In February, a lesbian couple attempted to register at the marriage registry in Beijing but their application was rejected.

The American Conservative takes note of Cook and Beniof's hypocrisy:  (Warning audio starts automatically when you hit the link.) 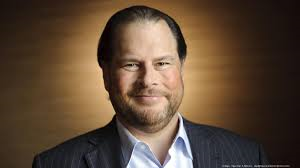 Mollie Hemingway points out that Salesforce CEO Marc Benioff, who is pulling all business from Indiana in the wake of its new religious freedom law, has no scruples about doing business in China, despite its horrific human rights record. Excerpt:

"China isn’t just a place that tortures people for their religious beliefs. There’s the running over peaceful protesters with tanks, forced abortions under China’s one child policy, and the fact they send people to labor camps for tweeting jokes about the government."

A couple of days ago, the Daily Beast reported on the gay rights situation in China. Excerpt:

"The state of LGBT rights in China is abysmal. Activists, in particular, face a slew of problems that stretch beyond the personal and become political.  “Hooliganism”—a placeholder for consensual homosexual conduct—was decriminalized in China in 1997, but things haven’t gotten much better for the LGBT community since then. Peer to peer, Chinese society is becoming more accepting of the LGBT community, but positive depictions of LGBT characters on the silver screen are still illegal. Films in which a major character identifies as LGBT are usually banned, like Brokeback Mountain, or Wong Kar-wai’s film festival gem, Happy Together."

More details on gay rights in China here. It’s not a pretty picture. Gays are incomparably more free as gays in Indiana than in China. It’s not even close.

Is this a problem for Marc Benioff? Is this a problem for Apple’s Tim Cook? Why do they swallow the Chinese camel while straining at the Hoosier gnat? In Cook’s case, it’s money: the $16 billion Apple made in China in the first quarter of the current fiscal year — that’s $16 billion in three months! — sure can buy some Tim Cook silence. He’s pushing around Indiana and other American states because it’s easy. It costs him nothing.

Thank you for again proving to rational Hoosiers these emperors of industry and government have no clothes.

Sheer, blatant hypocrisy of subscribers to the left liberal Democrat politically correct Utopian vision to ignore the meat of a matter by deflection and muddying of the truth and what is actually important.

Excellent post! Can any lawyer be forced to represent a client?

For the opposition, this isn't about rights; but a perverse "privilege," to abuse people of faith or other ideology.

Because they're not objecting to a foreign nation's policies, they can't object to the policies of an American state?

One of the perks of US citizenship is the ability to criticize government actions.

Anon, never said that. These corporate executives certainly can object all they want to Indiana's RFRA, even they haven't a clue what they're talking about. Our First Amendment, let's them do that.

The fact they can do it, doesn't mean doing so is not being hypocritical. They not only spoke out with phony criticism of Indiana's RFRA while remaining silent about real abuse of LGBT and women's rights in China. They are threatening Indiana with boycotts while doing business in China. How is that not hypocrisy? If they were truly worried about LGBT rights, they take a stand about abuse of those rights in China.

Anon, never said that. These corporate executives certainly can object all they want to Indiana's RFRA, even they haven't a clue what they're talking about. Our First Amendment, let's them do that.

The fact they can do it, doesn't mean doing so is not being hypocritical. They not only spoke out with phony criticism of Indiana's RFRA while remaining silent about real abuse of LGBT and women's rights in China. They are threatening Indiana with boycotts while doing business in China. How is that not hypocrisy? If they were truly worried about LGBT rights, they take a stand about abuse of those rights in China.

Indiana's AG should put those slandering this state & its people on notice; regarding loss of business, damages,etc...