Political parties are increasingly turning to a very unpopular tactic to increasing turnout:  mailers to voters telling them that their voting history is being monitored by the parties and other organization and that, if they fail to vote this failure, will be public record.  In other words, they're trying to shame likely non-voters into voting by outing their conduct.  The Wall Street Journal reports: 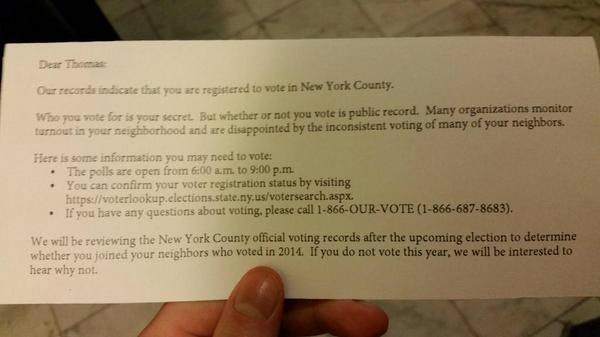 Democratic Party postcards and letters sent to more than 800,000 New Yorkers this week gave them grades based on how often they had voted and told them their voting records in 2014 would be watched.
Political observers, both partisan and not, said the mailers were akin to a pre-Halloween scare.

But so-called voter shaming has become standard nationwide, with recent examples in Alaska, North Carolina and Virginia, Democratic Party officials say. The mailers have proven particularly effective in competitive races, increasing voter turnout by as much as eight percentage points, according to a Yale University study in 2008.

The language used in the mailers bothered some Democratic Party officials. The end of one of the letters reads: “If you do not vote this year, we will be interested to hear why not.”

“I think that last line has a threatening tone to it,” said Jay Jacobs, chairman of the Nassau County Democratic Committee in Long Island, where some of the mailers were sent. “I don’t think that’s the way we go about it.”

Analysts said the mailers could backfire.

“It’s just dumb,” said Gerald Benjamin,a professor of political science at SUNY-New Paltz. “Citizens rightly believe their vote is a private matter and this could cause some voters to see this as an excessive scrutiny of their behavior.”

A Google search reveals numerous incidents of vote shaming across the country.  While most efforts are by Democrats, Republicans have increasingly become engaged in the practice.  Here is but a very small example of stories on the subject.

GOP To Iowans: Your Neighbors Will Know If You Don’t Vote Republican

Note:  The picture above is from a story on vote shaming in the Daily Banter blog.
Posted by Paul K. Ogden at 1:44 PM