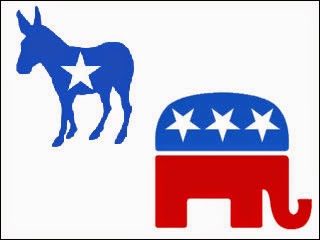 South Dakota - This state was long considered to be a certain Republican pickup with former Governor Mike Rounds having a double figure lead throughout the summer.  But a recent poll shows the independent candidate Larry Pressler, a former Republican U.S. Senator closing the gap to 3 points.  The driving force is Rounds support for the EB-5 program which allows green cards to the families of foreign investors who make investments of at least $500,000 to qualified economic development projects.  The program led to a series of scandals in the state.   It should be noted that the Democratic candidate Rick Weiland's numbers, which have tracked under 30%, have not moved one bit.  Rather Rounds' slide has benefited solely Pressler.  Polls also show Pressler would inherit  almost all of Weiland's supporters should the Democrat drop out.  While Pressler would probably caucus with Republicans, it is noteworthy that he did endorse Barack Obama in 2008 and 2012.

Kentucky - A recent Courier-Journal/Survey USA poll, which showed Democrat Alison Lundergan Grimes with a 2 point lead, broke the string of  10 straight independent polls showed incumbent Republican Mitch McConnell with a mostly 4 to 6 point lead.  That poll though is likely an outlier.    The most recent poll in the race, sponsored by Fox News, shows McConnell back ahead by 4 points.

Georgia - Republican David Perdue has led the Democrat Michelle Nunn in 10 straight polls.  However, the margins have been very slim.  The last six polls have been 4 points or less.  Nunn though recently has been trying to take advantage of a Perdue statement in a 2005 deposition that he spent most of his career in business outsourcing jobs.  When given a chance to temper those deposition comments, Perdue said:  "This is a part of American business, part of any business. Outsourcing is the procurement of products and services to help your business run. People do that all day."  Perhaps...but trying to educate voters about this in the midst of the soundbite-dominated climate of a political campaign is impossible.  That is a serious unforced error that could tip the balance to Nunn.

North Carolina - After a summer in which incumbent Democrat Kay Hagan has surprisingly led in 13 straight independent polls by margins that averaged about 4 to 5%, the Republican Thom Tillis finally appears to be closing the margin.  The last four polls show Hagan with an average lead of only 2 points.

Kansas - Good news for Republicans out of the Sunflower State.  After Independent Greg Orman led in seven of eight straight polls (the eighth one was a tie), including three by 10 points, incumbent Republican Pat Roberts appears to have reeled him back in.  The two most recent polls show Roberts leading by 1 and 5 points.  But, even if Roberts prevails in Kansas, the fact Republicans have had to divert critical resources to a state which should have been a solid victory for the GOP is a victory of some sort for the Democrats.
Posted by Paul K. Ogden at 9:45 AM

And outside the Senate, there's a good chance of the Governor's office of Kansas going to a Democrat as well. No one seems to want to run on Sam Brownback's record.

Laser facial treatment during Bangalore is available as good price tags. brazilian hair sale You could look at online world to your rates on the market and will be tremendously happy about the worth required every last appointment. Any pro general practitioners grant cycles in the middle every last appointment to be sure of any success together with notice the unintended effects. brazilian hair uk These require extraordinary consideration in avoiding redness in the neighborhood and also annoyance in the neighborhood. You are specified any number of medicine meant for coping with risks or simply many other unintended effects. brazilian hair The majority incidents for this medication own met hardly any acute unintended effects mainly because extraordinary consideration is certainly undertaken all through together with following a practice.