A proposed Broad Ripple boardwalk is getting sharp criticism before the plans have even gone public, Call 6 Investigator Kara Kenney reported. 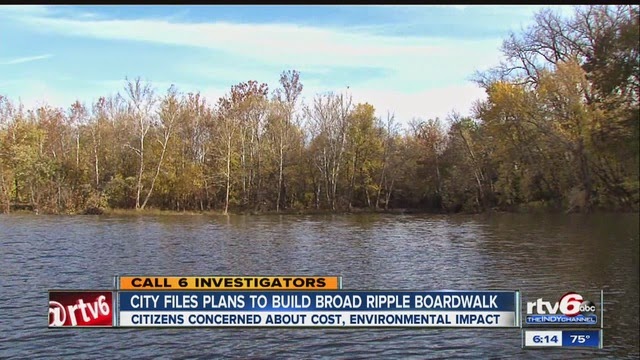 Kenney obtained documents showing the City of Indianapolis Department of Public Works has filed a permit application with the Indiana Department of Natural Resources Division of Water.

The city wants to build a boardwalk along the south bank of the White River for recreational and pedestrian use, and would run from Broad Ripple Park to Riviera Drive and the Monon Trail.
...

White River resident and enthusiast Brant Cowser is concerned about the cost and environmental impact.

“There’s going to be a lot of clear cutting along the riverbank,” said Cowser. “In Indianapolis, the river is such an asset if used right.”
..

Clarke Kahlo with the group Protect Our Rivers, is also concerned about issues like erosion, as well as who will pay for such issues in the future.

“It’s going to create a major nightmare for our city and the taxpayers down the line,” said Kahlo. “It doesn’t really rise to the level of something that’s imperative or highly needed.”

Of course, the Broad Ripple Village Association is all for the proposal:

“Unfortunately, most people unfamiliar with Broad Ripple don’t even realize that the White River bends so closely to Broad Ripple Avenue,” said McKeand in an email to Kenney. “While I haven’t had a chance to dive into the specifics of the proposal, the BRVA will almost always be in favor a plan that increases green space.  Additionally, this project will create yet another family-friendly space in the Village and will attract more daytime traffic.”

McKeand, apparently without even bothering to review the plan, makes the nonsensical claim that the building a boardwalk along the river "increases green space."   Of course that is not true.  The proposal reminds me of the city's proposal to put public art along the central canal.  Apparently the city suffers from the belief that nature by itself isn't a sufficient attraction for tourists, that government needs to get involved placing things in nature that will attract tourists.
Posted by Paul K. Ogden at 10:41 PM

First a boardwalk than they will want to build some more bars on the river front.